I believe it was the first (or one of the first) legal terms of art I learned in law school. It means "state of mind." In other words, in order to commit a crime, you have to have the proper state of mind to fit the requirements of the crime.

Why do I bring this up now? Because it now appears that we have a smoking gun indicating that officials at the Electronic Classroom of Tomorrow formed the necessary mens rea to be charged with crimes.

According to an Associated Press story today (which ran all over the place, but I'll link to my former employer's version), people at ECOT -- at one point the largest single school in the nation -- were ordered to deliberately inflate enrollment so the school could keep getting paid $100 million plus to "educate" children, even if those children weren't actually at ECOT.

ECOT infamously did a remarkably poor job of educating those who were, by the way. How poor? Only 109 of 3,794 ECOT graduates from 2010 earned a college degree within 6 years of graduating. But I digress. 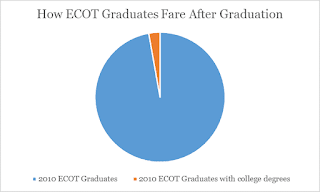 Back to the school's potential crimes.

According to the whistleblower who made this claim and worked for the software company that handled enrollment for ECOT, "school officials ordered staff to manipulate student data with software obtained following the state’s demand that it return $60 million in overpayments for the 2015-2016 school year."

That's right. ECOT was so arrogant that it ordered people to artificially inflate enrollment ... after the state had fined the school $60 million for inflating enrollment.

That's right. No question what the offenders' states of mind were. They knew it was wrong. They had been fined for doing it the previous year. And they did it anyway. Imagine what they told people to do before they were caught???? (Though, technically, they were caught in their first year of operation and on several other previous occasions, but not for as much money.)

Why the arrogance? Because ECOT's founder, Bill Lager, and other employees had invested $2.8 million in Ohio politicians since they started operations in the 2000-2001 school year.

It wasn't that long ago that people went to prison for inflating enrollment figures at Columbus City Schools. What do you want to bet that the politicians who have taken a bunch of money and kudos from ECOT will do the same thing to that school's officials?

The taxpayer money involved here, if the enrollment overinflation that's been found over the last couple years is extrapolated over the course of ECOT's entire lifespan, is north of $500 million. By way of comparison, the infamous Coingate scandal from 2005-2006 ended up costing taxpayers about $50 million.

So ECOT and Lager's ripoff could be 10 times that of Tom Noe, who spent about 2 years in federal prison.

Now that we have insiders spilling the beans on the real mission of ECOT -- making money by ripping off taxpayers -- ECOT's top bananas certainly seem much closer to taking a trip up the river.

Because we now know their state of mind.

And it sure seems criminal to me.

Posted by Stephen Dyer at 1:07 PM No comments: 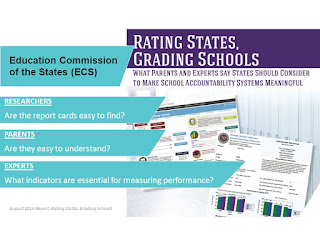 When Ohio switched to a new A-F report card system in the 2012-2013 school year, much was made of how wonderful it was.

Here's what the Ohio Department of Education said about them, veritably gushing over the Education Commission of the States' awarding the system its highest marks:


"We released the new A-F report cards with the idea that they would be easier to understand, and provide more information to both parents and educators,” ODE spokesman John Charlton said. “This report kind of validates our efforts so far, as we continue to work on this report card. The real winners are the students in Ohio. They’re going to benefit from the information in that report card, whether it’s their parents using the data, educators using it, or whether the students are looking at it themselves.”


"The Buckeye State’s new A-F report card is a wonderful opportunity for parents to gain a better appreciation of how their child’s school is doing, and to take action if necessary."

But I was concerned because the new A-F system was even more reliant on test scores than the previous system. And test scores are nearly perfectly correlated with poverty rates, not educational excellence. Here's what I said after the first batch of report cards came out:


"The new Report Card is based largely on standardized tests, which are tremendously influenced by demographics. Under this new system, a building and district's ratings are even more dependent upon their demographics than the prior system, which was pretty well dependent upon demographics as well."

So imagine my surprise when a new House Bill 591 appears and does away with Ohio's much-lauded A-F report card in favor of one less influenced by test scores. I should be excited, right? Not so fast. See, here's the thing.

It would keep the A-F report card for consequential actions -- the very things that make these A-F grades so high stakes, problematic and consequential for schools, districts, parents and kids.

What's "consequential" mean? Oh, whether a district is low performing enough that a charter school can come in. Or kids qualify for private school vouchers. Or whether a charter school closes. These -- and other things -- will all still be determined by a district or school's rating on the hated A-F report card.

And the bill eliminates several transparency reports about how schools spend money and how they educate kids. One of the things Ohio does better than nearly every other state is produce meaningful and copious data points.

Other than that, though ...

So why won't he just do a simple bill to get rid of the current system, replace it with a more rational system and go from there? Why would he let this system he admits everyone hates continue holding its dangerous grip on students and schools?

Again, these problems were all pretty predictable from the time the A-F report card was implemented. Yet folks couldn't stop fawning over the brilliance of turning five "grade" levels into the familiar A-F scale from the less familiar Excellent with Distinction, Excellent, Effective, Academic Watch and Academic Emergency system.

Now everyone hates it.

Do Charters Spend More than Districts, Or What Do Medians Mean?

I try to steer clear of mumbo jumbo on this blog. I wish to simplify rather than complicate already dense, complicated topics. But when it comes to expenditures in charter schools and school districts, it matters whether you know what medians and means are. So please indulge a little nerdification here.

So when you have a series of numbers with wide variations, you generally want to use medians because they answer the question of what is the "typical" number. If you don't have much variation between numbers, generally averages work better.

Which brings me to the question of which schools spend more in Ohio, charter schools or school districts. These two charts will tell you both, depending on whether you want to use medians or means. 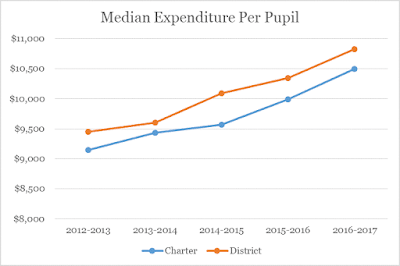 The graphic on the left shows the median expenditure per pupil for each school type. You'll see that generally, Ohio school districts spend a few hundred dollars more per pupil than charter schools.

The chart below the median chart shows that on average, charter schools spend more per pupil than Ohio school districts.

So, what gives and which numbers matter most in determining this issue? 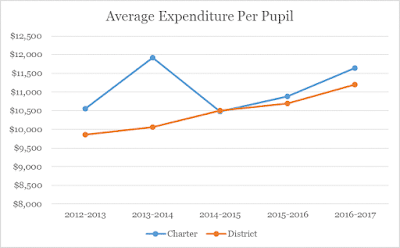 The variation between the highest and lowest spending charter school last year was $36,000 -- not far off from the school district variance of $24,000. In the 2013-2014 school year, the reported variation in per pupil spending at charter schools was $1.4 million. And even if you discount the handful of charters who likely erroneously reported spending more than $100,000 per pupil, the difference remained well north of $85,000.

So that means in order to be fair, you had to use medians to express what a "typical" charter or district spent to account for those variations. Which means charters spent less per pupil than districts. This year, though, there's a real question if using averages now is fair game. Because the wild variations in charters aren't there anymore.

In other words, the "typical" and "average" charter school are becoming far more similar than in the past. 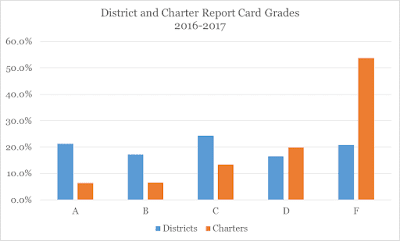 Why does all this matter? Because we were told (and have been told) again and again that charter schools and the private sector that drives them perform the same or better academically at lower cost than Ohio's local public schools. And charter school advocates are now saying they need more money because they can't spend what they need to spend in the classroom.

Yet Ohio's charter school sector overall spends about the same and performs far worse. Even if you want to look at medians, is the few hundred dollars' savings worth the far worse graduation rates and worse overall academic performance in charter schools?

The ECOT closure is a good start toward making Ohio's charter school sector more reflective of the ideal market-based education model that's focused on quality rather than enrollment, real or imagined.

Yet we still fall short of our kids and families who want options but are instead duped into believing a few slick brochures and smooth talking sales pitches selling them on the idea that choice rather than quality should drive their children's education. It is the quality of the option that should drive the choice. And it is up to policymakers to ensure that quality is what drives their desire for more educational options.

Because that whole "better and cheaper" argument for charters? In Ohio, that dog don't hunt.
Posted by Stephen Dyer at 3:59 PM 6 comments: