We've posted a fascinating graphic over at Innovation Ohio that pretty well proves how unwilling Ohio's current leadership and GOP have been over the years to reduce the reliance on local property taxes to pay for school. Here's the chart: 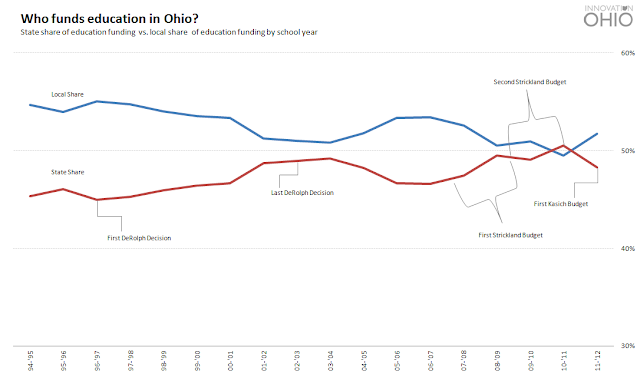 What this proves is that the only time state share has been reduced has been when the Supreme Court orders it, or other political parties are involved in the process. One-party GOP rule has not, on its own, reduced the need for property taxes to pay for education in Ohio.

And just as a point of pride for me, the only time on record that the state provided a larger share of education funding than local property taxpayers was the last year of the Strickland Administration, which was covered by the House Bill 1 budget bill that I worked through the House.

That bill contained the Evidence Based Model, as well as many other education reforms that ended up earning Ohio the Frank Newman Award from the Education Commission of the States for the country's most bold, innovative and non-partisan education reform of 2009.

The next year, Gov. John Kasich eliminated the Evidence Based Model, cut $1.8 billion in education funding and has instead presided over a record number of new-money operating levies equaling a record $1.34 billion.

But in the above chart I see hope. Because it wasn't that long ago that the Ohio legislature actually provided a greater share of education funding than local taxpayers. So a return to that ratio is never more than one budget, and committed state leadership, away.
Posted by Stephen Dyer at 2:50 PM