After I read the Columbus Dispatch story that laid out just how much Ohio's Charter School experiment had failed, especially in relation to solving any urban education issues, I decided to look closer at this question: Are Charters really comparable to Big 8 urban buildings? The most basic question I could think to ask was, "How many kids from the Big 8 schools actually make up the populations of Big 8 Charters?" 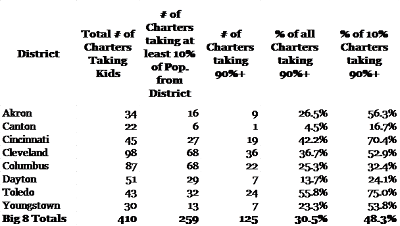 I was frankly stunned by these results. Even some of the highest performing Charter Schools in the state take a relatively small percentage of kids from the Big 8 district in which they reside.

For example, Columbus Preparatory Academy, which routinely ranks high on accountability measures, only took 49% of their children from Columbus City Schools. The school took about 42% from South-Western, another 5% from Hilliard and kids from Bexley, Dublin, Olentangy and Westerville. So is it fair to hold up Columbus Prep's performance and compare it with Columbus City's?

Other examples are the ISUS academies in Dayton, which tend to perform very well compared with Dayton. They took between 70% and 75% of their children from Dayton. They took a good portion of children from suburban Huber Heights and Kettering. So is it fair to compare ISUS' performance with that of Dayton when 1 in 4 kids don't come from Dayton? Yet their performance always is compared with Dayton.

Hardly seems fair to me.