The new school funding formula released Wednesday has some positive things in it. For example, it looks like the poorest districts in the state do better than the wealthier. I take that to mean the formula is woefully inadequate because one shouldn't have to rob Peter to pay Paul; there should be enough for Peter and Paul. But within the confines of an inadequately funded formula, funding those districts that are in greatest need should be prioritized.

However, let's tap the brakes on the "Hooray for Equity" Bus. Because while the governor's formula does take into account a district's "ability to pay" for schools, it leaves out a very important measure -- its actual ability to raise revenue. Instead of looking at what a district actually raises on one mill of property tax, it looks at the district's property valuation and income. Both of those measures have value, but they miss the point.

The reason the Ohio Supreme Court ruled four times that relying too much on property taxes is unconstitutional was because districts that raise small amounts of revenue on a mill have to tax themselves at very high rates, while districts that raise a ton of revenue don't. So the measure that is most grounded in the bottom line -- what can a district contribute -- is more closely related with how much it raises on a mill that it takes to voters, not its overall valuation and income, though those can illuminate the overall picture. The bottom line for me is this: How much would local voters have to raise to replace cuts, and how much don't they have to go for now that they have an increase?

And one can see this issue immediately when you look at what happens in each district under the new runs. Here are the top 25 districts (capacity to raise a mill and median income from latest District Profile Report I have) that have the most equivalent mills removed from their districts under the new formula (total losses in this biennium vs. what they got this school year). 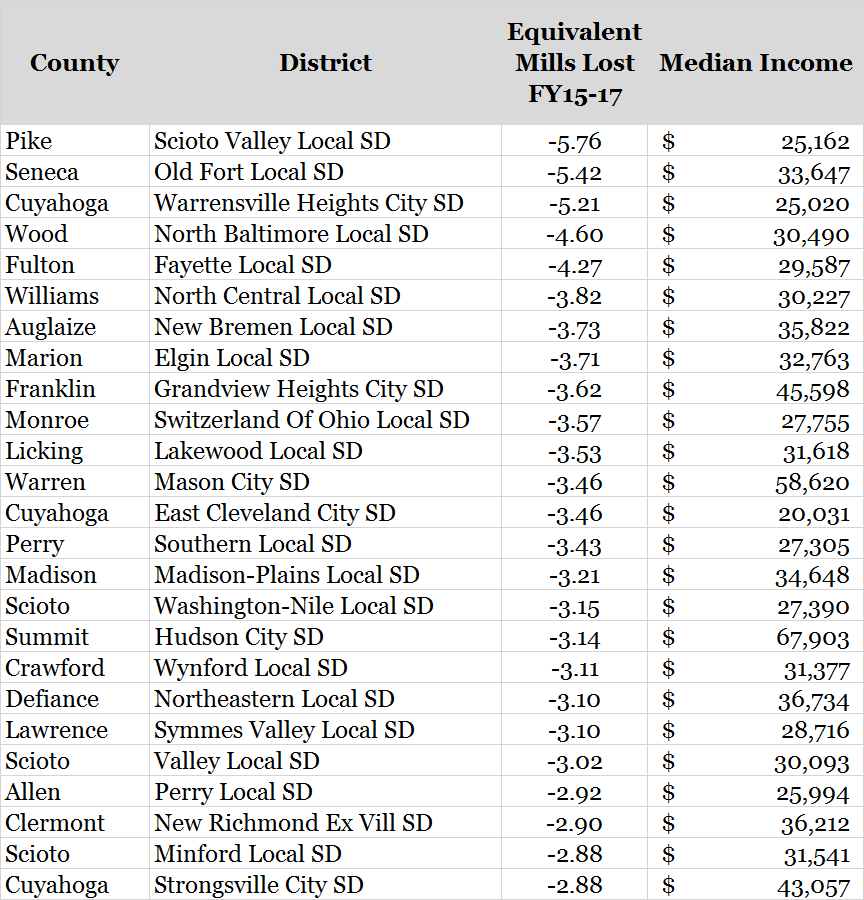 What does this mean? It means that many poorer districts will have to ask for significant local levies of their lower income residents to make up the losses from this formula. And that's with the extreme Robin Hooding going on. Again, another instance of explaining why equity means very little if you have inadequate resources to distribute.

Meanwhile, the top 25 increases by equivalent mills are all in districts that have median incomes far below the state average. 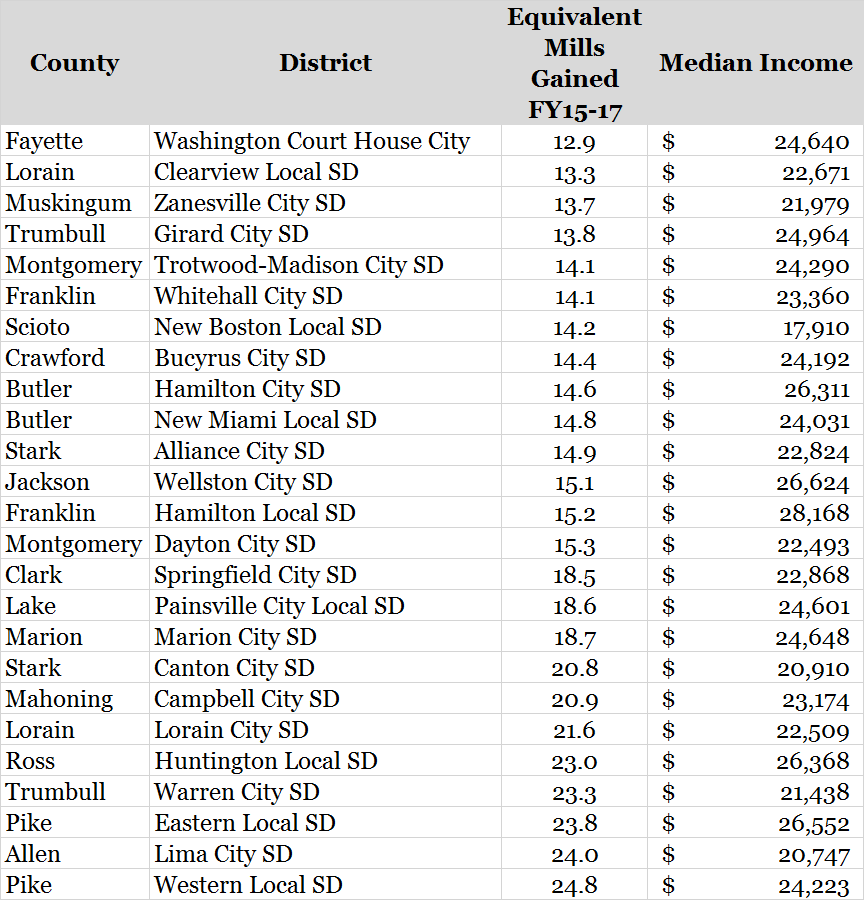 As you can see, the redistribution of this formula seems to work better on the handing out of the money rather than the taking of the money. Why would this be?

There simply isn't enough state money in the wealthiest districts to provide the funds necessary in the state's poorest areas. That's why places like Scioto and Symmes Valley get caught up in the large relative cuts, as well as the Hudsons and Masons.

What this new formula demonstrates pretty clearly is this: without adequate resources, it is impossible to only take from the state's wealthiest districts and give only to the poorest. In order to provide for the state's poorest districts, you have to take from its middle class and even some poor districts as well.

There is no better demonstration of inadequacy than the two districts that get the most equivalent mills removed and added to their bottom lines. Scioto Valley residents, who make $25,162 have to raise more than 5 mills to replace their cut -- the state's largest loss. Western Local residents, who make a bit less at $24,223 will see the equivalent of 24.8 mills in new state money coming to their district.

What's significant about these two outcomes?

With apologies to Stan Lee.
Posted by Stephen Dyer at 10:53 PM