Back in 2010, Gov. John Kasich claimed the state's education funding formula didn't spend enough money in the classroom. He claimed then that districts spent too much money on administrator salaries.

Yet new state spending data  for the 2014-2015 school year shows that Ohio's school districts spend less money per pupil -- and a much smaller percentage of its overall spend -- on administrators than Ohio's charter schools -- the allegedly more "efficient", business-like education answer.

Charters spend so much more that, as in years past, if Ohio's charter schools spent per pupil on administration what Ohio's public school districts did, charters would be able to spend about the same amount of money in the classroom as districts do, despite their $1,400 less overall spend.

So, according to the data, the least efficient way of putting more money in the classroom, as Kasich professed he wanted to do in 2010, was dump more of it into charter schools. Yet charter funding has increased by about one-third since Kasich took office. 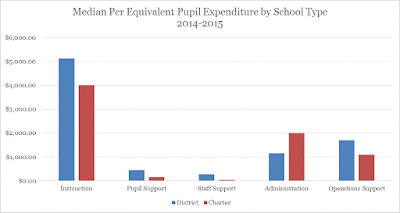 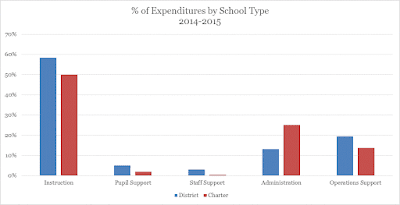