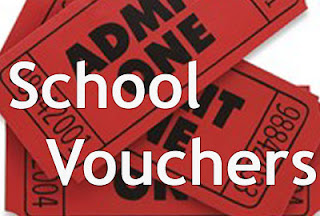 State Sen. Matt Huffman, R-Lima, introduced Senate Bill 85 last month amid some momentum. However, that momentum must be tempered by what the Ohio Legislative Service Commission discovered during its fiscal analysis of the bill. Even though it's being touted as an "income based" voucher program, it actually would apply to any family of four making $98,000 or less. According to LSC, that would apply to 74 percent of Ohio families -- hardly the vision for vouchers that was articulated by Chief Justice William Rhenquist in the landmark Zelman case that established the constitutionality of Ohio's voucher system -- when it was a $6 million program in Cleveland.

Under Huffman's bill, vouchers would expand statewide at an additional overall cost of $1.2 billion, with a more than $5 billion cut to money for school districts. This is assuming the 1 million more students eligible for the program take advantage of it.

However, this has always been the issue and misleading argument with voucher programs. There simply aren't enough seats in Ohio's private schools to accommodate that many students. There are currently 60,000 open EdChoice vouchers, and barely 1/4 of them are utilized. And there aren't enough open seats for 60,000 students. All it would take to subsidize most, if not all the current 117,000 or so students in Ohio's private schools is for about one out of 10 eligible students under Huffman's bill to take the voucher. It would cost $607 million for these students to all receive public subsidies, using the same LSC figures on the current private school population

These voucher programs are designed not to "rescue" kids from "failed" schools; they are designed to use taxpayer dollars to subsidize the cost of private school for parents who have already made the choice and currently are paying for that choice on their own.

It's been a problem since the program's beginning. And it's what happened in Cincinnati when the special education voucher program started. Of the 199 students who applied for the special ed voucher, only 15 had ever been in Cincinnati Public Schools.

Don't fall for the argument that vouchers give kids a chance who otherwise don't have the chance to "escape" their schools. They overwhelmingly go to students whose parents have already made that choice for them and, in many cases, never really attended the school district whose state money is now subsidizing that decision.

If there were a requirement that said no student can receive a voucher unless they have attended the local public school district for at least one continuous school year, you would see how few parents actually decide to use these vouchers for the reasons espoused by their advocates.
Posted by Stephen Dyer at 10:40 AM