The GREAT Scholarship -- A first for Ohio cities 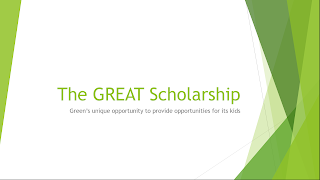 I haven't posted much on here about my second (or, technically THIRD) life as a City Councilman in Green. Typically, my life as an Education Policy guy and City Council don't really cross paths. One job fixes road, bridges and sewers. And the other deals with education.

Bad Catskills jokes aside, there aren't many times when Education Policy meets Municipal Policy, especially in a city like Green that isn't huge and whose mayor doesn't actually run the schools.

Well, I changed that this week when I introduced an ordinance that would create the Green Reaches Educational Attainment Together Scholarship. Yes, its acronym is GREAT.

The idea is to provide $2,500 annual scholarships to first-generation students from Green as long as they maintain a 2.5 GPA in Green High School and in college (either two-year or four-year).

For years, Ohio (and other states) have cut their commitment to its higher education system, forcing families and students to go deeply into debt to pay for the college education more and more of our young people need to thrive in this 21st Century economy.

We've known for a long time that first-generation students tend to be the most at-risk for not attending college, not finishing college and having to pick up the most outside employment to pay for it.

And that doesn't even touch the fantastic economic development tool this would provide to our communities. For example (this is according to the same studies cited previously):

I'm proud that my friends at the Fordham Institute (with whom I have quarreled over the years) have shown support for this, as are my local school folks. If you feel this is something cities should do for economic development and other reasons, please contact my city's mayor and city council members.

I am more than willing to change or tweak areas that need fixed. That's the legislative process.

Here are their email addresses: