A recent story in the Columbus Dispatch revealed that Ohio's charter schools mirror charter schools nationally in that they have been a major contributor to the re-segregation of the nation's public schools.

However, it appears that the Dispatch story was a localized version of a national Associated Press story that used federal data to reach their conclusions. Using that data, the Dispatch found that by 2015, 25 Ohio charters had 5,000 minority students without a single white student.

So, using a similar segregation standard, I decided to take a look at state-level data. And the results are striking. 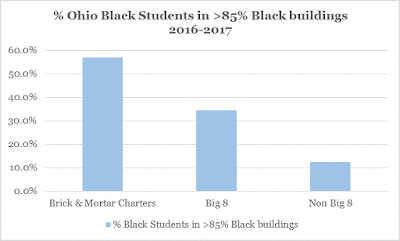 And outside of the big 8 urban districts (Akron, Canton, Cincinnati, Cleveland, Columbus, Dayton, Toledo and Youngstown), the desegregation is even more remarkable. Only 12.3 percent of Ohio's black students attend schools with less than 10 percent white students. Remember that last school year, about 1/2 of all Ohio charter school students do not come the state's Big 8 urban districts. 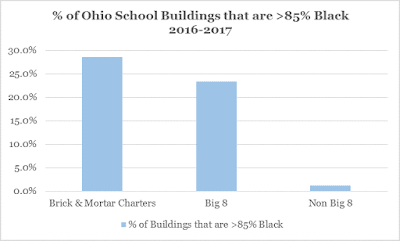 Finally, you can look at a simple line graph to see how the distribution of racial composition is much more uniform in Ohio's urban buildings than in charters. What does this mean? It means Ohio charters tend to be more frequently segregated and to a greater degree than their urban school building counterparts. 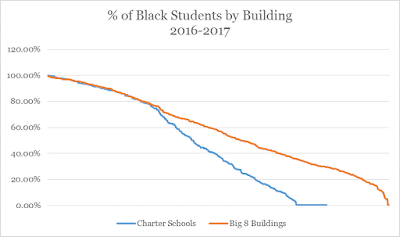 Look, it's bad enough that Ohio charter schools overall have a performance problem and a funding problem. Now it appears they have a serious racial segregation problem -- an issue that was deemed unconstitutional by the U.S. Supreme Court in the landmark Brown v. Board of Education case in 1954. It seems to me that allowing more students greater access to a more segregated school system would run afoul of that historic ruling.

Are there exceptions to this rule? Of course. But overall, the trend is clear.

Can we please address these serious and significant problems quickly and firmly, Ohio General Assembly and Gov. Kasich?

Anyone care to hold their breath while we and our kids wait?
Posted by Stephen Dyer at 11:09 AM