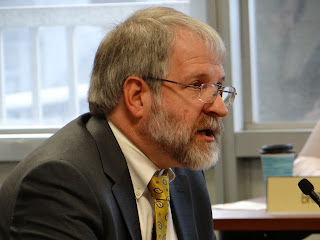 Well this is quite a thing. State Superintendent of Public Instruction Paolo DeMaria wrote a memo to school board members Sunday that openly claimed that Ohio's school funding system is now constitutional. Even though the Ohio Supreme Court has ruled four times that it's unconstitutional.

Why did he say this? Because the court hasn't ruled on the issue since 2002. Yet the reason they haven't is because the Court dropped jurisdiction over the case, not because they thought anything was fixed. So plaintiffs are barred from suing over the issue anymore. Yet DeMaria is telling incoming State Board members that means it's constitutional.

Because plaintiffs can't test it?

Look, according to the fourth Supreme Court ruling from 2002, “Until a complete systematic overhaul of the system is accomplished, it will continue to be far from thorough and efficient and will continue to shortchange our students. The overreliance on local property taxes is the fatal flaw that until rectified will stand in the way of constitutional compliance.”

So let's use the test laid out by the Ohio Supreme Court (not the State Superintendent of Public Instruction) to determine whether today's school funding system is constitutional, shall we?

Today's school funding "formula" is not appreciably different from the one instituted in 2002. It has a few different calculations, but it's not unrecognizable. Certainly no "systemic overhaul." In fact, it's not even a formula, per se. The amount for basic aid was set up through arbitrary increases from the Building Blocks formula last calculated in 2007. It's so inadequate at calculating student need that nearly every school district gets too much or too little under its mechanism.

State Reps. Cupp and Patterson are working on a real formula overhaul. And in 2009, the Evidence Based Model certainly fit the definition of an overhaul that calculated an actual cost. But today's "formula"? 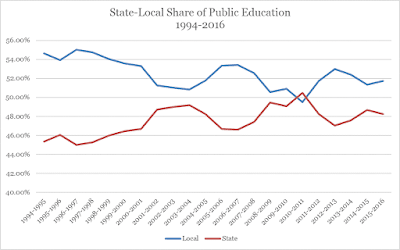 So clearly, the cost to local taxpayers has gone up since 2002-2003. In addition, look at average property tax rates. In 2002-2003, the Ohio Department of Taxation reported that the average number of mills a district collected from property taxpayers to pay for schools were 30.06.

That's a 25% increase in local property taxes paying for schools!

Under the key requirements set by the Ohio Supreme Court in 2002, today's school funding system fails to meet either.

The question remains: Why is the State Superintendent telling school board members the exact opposite? Especially given how potentially influential the state board could be in helping state lawmakers and the new governor adopt a real "systemic overhaul" of the school funding system that doesn't overly rely on property taxes to fund it?
Posted by Stephen Dyer at 11:12 AM