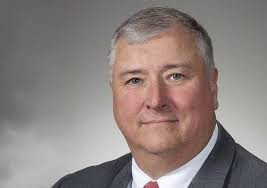 House Speaker Larry Householder, who famously is from Perry County -- the home of the state's school funding lawsuit -- announced at his year-end press gaggle yesterday that fixing Ohio's exploding voucher crisis will be priority No. 1 next year.

"We have failed badly as far as our report card system and our testing system in this state," he said.

That's quite an admission. And commendable. However, it has also been true forever.

Our system has always been rigged against poor districts because as we now know, the "achievement gap" is explained exclusively as a poverty issue -- and always will be as long as it is standardized tests that states use to measure educational effectiveness.

Look at the list of the lowest performing school districts on state tests in 2005 and look at them today.

They are the same districts.

So why is Householder so concerned about this now? I have a theory that I think will hold up: Now that this rigged report card is affecting his districts, he's starting to realize their awful impact.

What happened is that pro school choice advocates, led by their champion, state Sen. Matt Huffman, R-Lima, reached waaay out over their skis, culminating in this year's budget disaster (which we were first to point at at Innovation Ohio, and I and we had been warning about for years).

So now, districts are losing $60 million more in state aid this November to EdChoice vouchers (vouchers originally meant to "rescue kids from failing schools") than they did last November.

And over the last two years, the number of school buildings -- even in high-performing school districts like Solon, Upper Arlington and Worthington -- has skyrocketed. 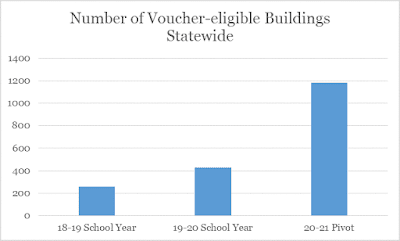 While the number of buildings has climbed dramatically from about 9 percent of all school district buildings to more than 1/3 of all buildings in two years, the number of districts that now have to worry about losing state funding to vouchers has simple gone off like the Big Bang. 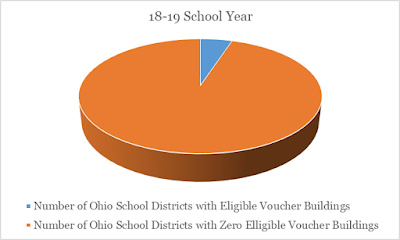 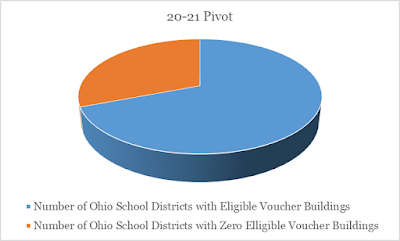 So now there are 424 of Ohio's 613 school districts with at least one building qualifying for vouchers.

Last year, there were 31! That's right. In two years, the number of districts losing funding to vouchers will jump by more than 13 times!

This explosion is extraordinary and in many places a crisis. Why? Because two years ago these districts and their kids lost zero state funding to private, mostly religious schools, Now they lose money -- in some cases significant money.

If you look at the counties where the relative shift in funding from public to private schools has jumped the most, it's all rural counties -- including Householder's home county. 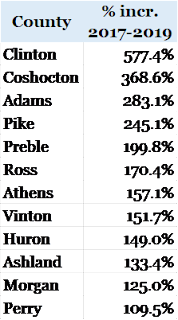 As you can see, Perry is one of 12 Ohio counties who have seen their state funding to vouchers more than double between November 2017 and November 2019. Ohio has 88 total counties.

It is these rural counties, which can't offset much state revenue loss because they raise so little on property taxes, where EdChoice state funding transfers are just killing districts. This, I think, explains Householder's urgency. It's hurting his community.

All politics is local indeed.

There are many ways of undoing this damage. Not allowing voucher buildings in districts that are high performing overall is one. As is requiring that buildings must be low performing on more than a single report card measure before being voucher eligible. That way kids in the district don't lose state funding because a handful of kids aren't being served in a single district building.

But Householder really nailed what the heart of the issue is: the Report Card and standardized tests. So if he effectively fixes the root problem, kudos.

And while I really don't like what's happened with the voucher explosion this year, if that's what it takes for the state to once and for all put a stake through the heart of the state's rigged, unfair, inaccurate standardized-test-based accountability system?

It's about time.
Posted by Stephen Dyer at 9:48 AM