Both of my sons had another day off from school today. Now that we've hit our so-called "Calamity Day" limit (meaning that starting today, all snow days must be made up), the schools sent home a thing they call a "Blizzard Bag." No, it doesn't mean everyone gets some DQ. It means every kid gets a big amount of homework.

I was actually curious, from a policy perspective, what my two sons' bags would look like. My third grader is just getting ready to take the state proficiency tests in a couple months. My preschooler is not. What I saw was something very interesting: Guess which bag you would prefer to do? That's right. The preschool bag.

The third-grade bag required little more than practicing for the Ohio proficiency tests. 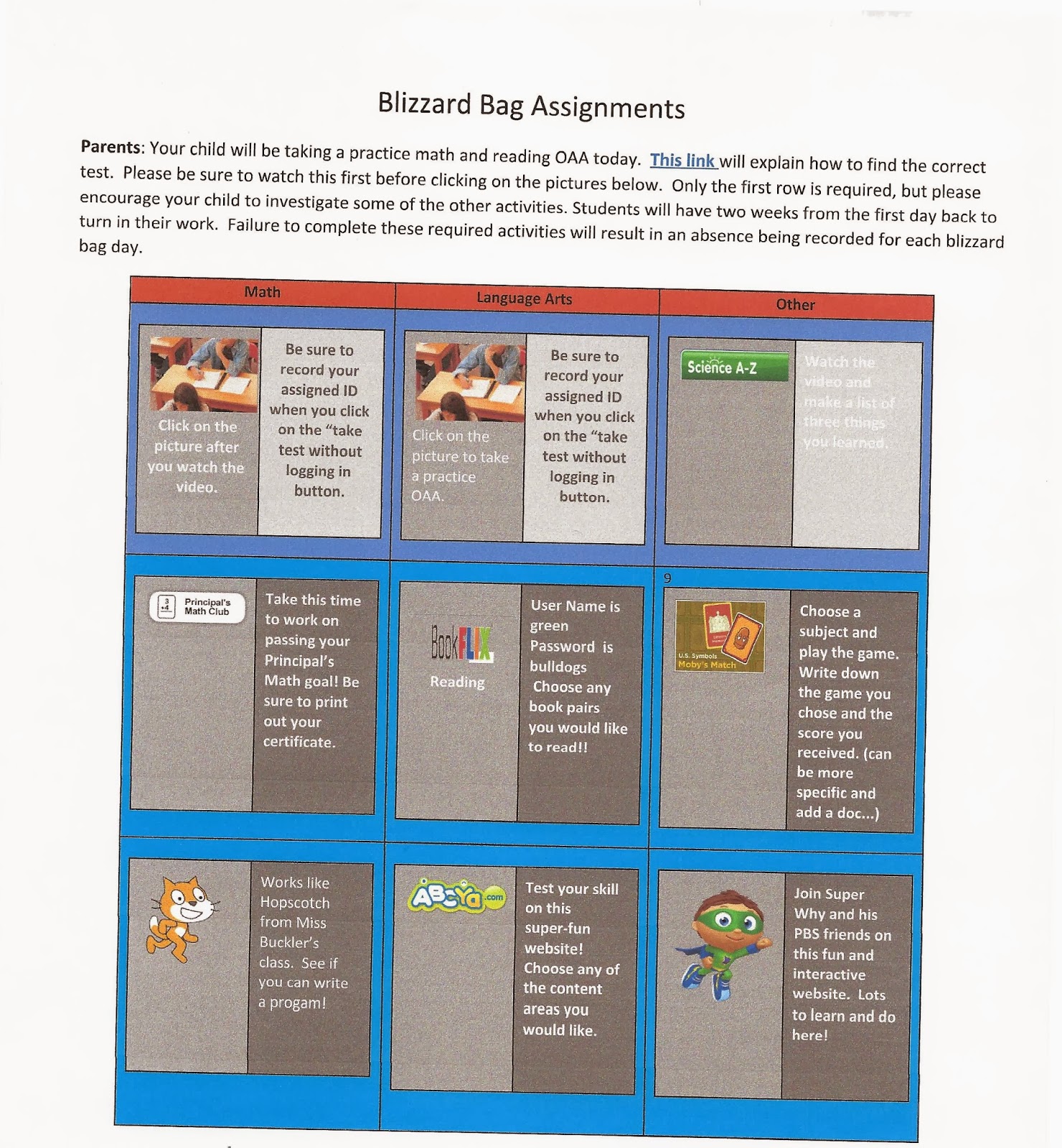 Meanwhile, my 4-year-old's preschool bag involved exploring his world -- counting how many toys he has (way too many thanks to generous family), how fast it takes to melt snow, drawing pictures of what snow looks like before, during and after it melts. 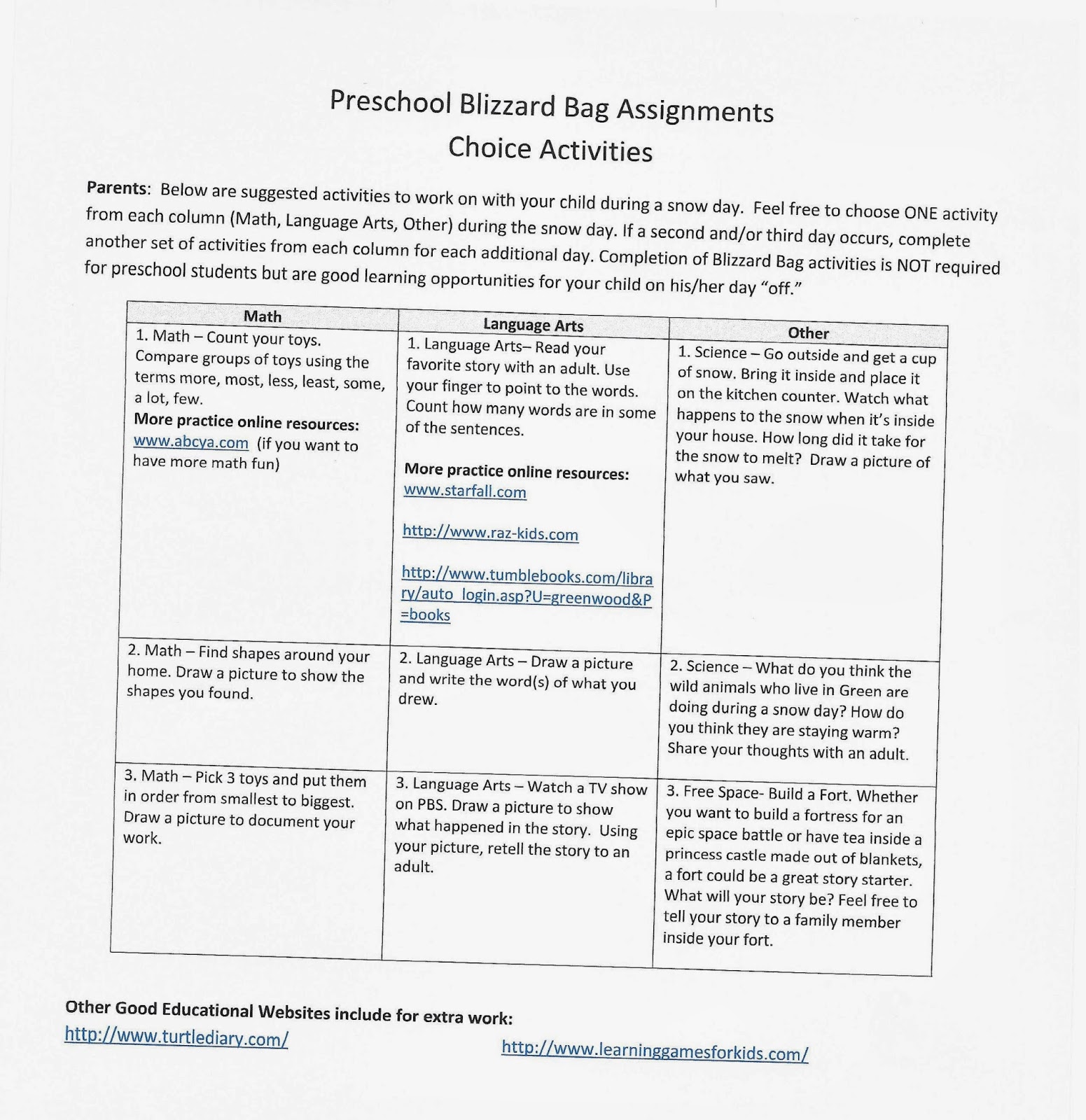 In third grade, Ohio starts the march toward testing. In preschool, kids aren't tested. Yes, there is a kindergarten readiness assessment, but it doesn't count toward a school district's Report Card rating. So it's not nearly the high-stakes test that my third grader's test will be in a few months.

As many of you know, I am not one of these "all tests must go away" types. I think testing has its place as an assessment tool for teachers to more carefully craft individualized learning for students and get a general idea of district and building performance.

When tests become everything, though, learning begins to resemble my third grader's Blizzard Bag. And, by the way, I don't blame teachers or school officials at all for this. Theirs is the responsible response to a test, test, test public policy instituted at the state level.

And, frankly, I get it. If teachers can free up class time for real learning by having kids practice their proficiency tests at home, I would do that too.

But my fear is that as we delve even deeper into higher and higher stakes tests, more and more school days will resemble what my son's learning day -- taking a bunch of tests, painfully counting how many more questions were left, and hating every second. This is not the learning experience our kids need. But it is the one our adult policymakers have thrust upon them.

And as someone who was one of those policymakers for a few years, I would like to apologize for anything I did to further our course down this high-stakes path.

Do not confuse my concern over testing with my full-throated support for standards. I love the fact that my third grader is learning pre-algebraic concepts and thinks the way I solve complex math problems is "old-fashioned." I think Common Core holds a lot more promise to provide meaningful learning than our current regime. Even the Common Core tests try to get at higher levels of thought by having kids think critically and show work.

But a test is a test. I don't know many, if any, kids that like tests. But I know many, including my own, who would love to do the Blizzard Bag my preschool son brought home. We need a lot more of that kind of stuff going on in our schools, and a lot less of the standardized test prep that teaches kids not so much how their world works, but how tests work -- a valuable skill no doubt, but one that does not an education make.

As long as our policymakers put so much stock in tests, though, schools must teach these test taking skills for their own survival.

But it's so much cooler to watch snow melt.
Posted by Stephen Dyer at 1:30 PM