Yesterday, my respected colleague at the Fordham Institute -- Chad Aldis -- posted a blog that painted quite the rosy picture of Ohio's shift toward charter reform. And while the steps that the Ohio Department of Education is taking seems like a shift, I'm less apt than my friend to get overly excited here.

This isn't an indictment of Chad. He's been a fighter for reform recently, especially about authorizer transparency. But I'm less excited about the department's stance than he.

First of all, the closures ODE initiated only happened because a sponsor shut down and the department took over sponsorship of these schools. So the department is acting like a fairly responsible charter sponsor. And that's nice. Except ODE only sponsors 21 of 400 charters. So there's that.

Again, having the department tell 4 charters they're going to be shut down is nice, but those 4 represent 1% of Ohio charters. When they shut down two schools last year for non-academic issues, that was nice too. And the three sponsors ODE warned against opening any new charters last April? They oversee less than 10% of all charters in Ohio.

Perhaps this speaks to the benefits of a Massachusetts-like charter regime where the only sponsor is the department of education, instead of the scores of sponsors Ohio has. But I digress.

The state's current charter reform legislation -- as I've said many times -- is the most bold and courageous charter reform effort offered in 3 decades by Ohio Republicans. Yet it still does not address the two most pressing issues: funding and tightening closure standards.

I chalk that up to Ohio being a national laggard on these issues than a real legislative shortcoming. But it demonstrates just how far we need to go as a state.

And I've said before that I'm encouraged that ODE has changed language on its website to call it "Quality School Choice", as well as the efforts Chad mentioned in his blog.

My bottom line is this though: the three sponsors whose crackdown Chad touts still oversee schools that educate about 8,600 children. And 2 of the schools Chad mentions as closing were open just a few weeks, while the other 5 accounted for $9.6 million of the nearly $1 billion spent last year on charters. That's barely 1% of all the money spent on charters last year.

As for how long these closed schools were open, the V L T Academy and Cleveland Community School had been open since the 2005-2006 school year. Imagine Cleveland and Imagine on Superior have been open since 2010-2011. Villaview has been open since 2006-2007. Those schools still ended up having 9,450 children go through their doors over the years. And they still may not be closing because the schools can appeal the state's ruling.

Closing down a couple schools here and there is a good step, but hardly the crackdown that's necessary. The Center for Research on Education Outcomes (CREDO) found recently that the best way to improve a state's charter sector is close as many poor performers as possible, and quick. More than 1/2 of the money spent on Ohio charters last year came from the same or better performing districts. 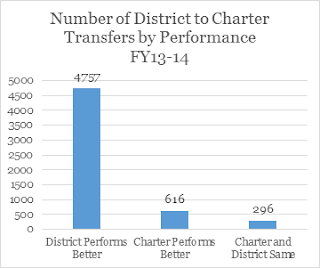 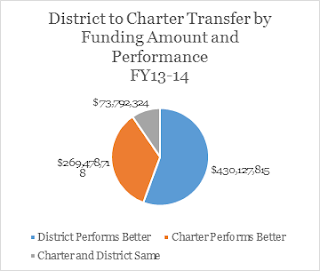 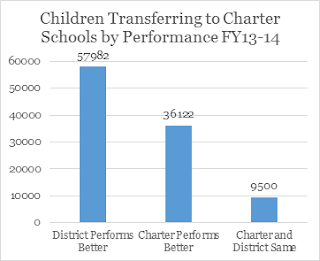 Ohio E-Schools are a disaster. Look at this chart showing how E-Schools are dragging down overall charter school performance based on how many report card ratings the charter is better or worse than the district that sent them their kids. 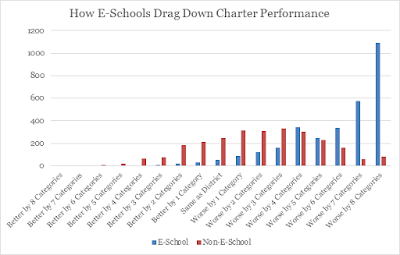 And let's not forget that local taxpayers have to subsidize charters that perform the same or worse to the tune of $180 million because charters get so much more state money than their students would have received in their home districts that those districts have to fill in the gap with local revenue.

These are the big issues.

When ODE starts going after the Electronic Classroom of Tomorrow -- who took all  $100 million or so it got from districts that performed better, or White Hat schools, which got 1 A, 5 Bs and about 70% Ds and Fs on the state report card, or the E-Schools in general, which educate about 40,000 kids and receive more than 95% of their funding from higher performing districts, or the sponsors that oversee 50-60 schools rather than 4 or 5, then I'll call it a crackdown.

Since 2000, 197 charter schools have been shut down -- about 13 per year. Of those 197 charter school closings, 101 were done voluntarily. Only 24 were due to the state's closure law. Sponsors ordered the other 72, but only 8 were explicitly for academic reasons. Primarily, sponsors have closed charters for lack of financial viability or failure to comply with their contract.

So these closings and warnings that ODE has recently announced during its "crackdown" don't even constitute a half-year's worth of charter closings, historically.

I'm not saying what ODE is doing isn't valuable. It is a step in the right direction, though a creakingly small one.

I am saying that we should pump the breaks on the crackdown talk until ODE is given the authority to actually crack down on the poor performing charters that have drained so many resources while poorly served students for far too long. The current legislation would be a nice step toward doing that.

But until then, I fear it's spitting in the wind.
Posted by Stephen Dyer at 1:57 PM