There has been a claim floating in the ether that states something like this: Charter school funding in Ohio has a neutral impact on funding for non-charter students. Marianne Lombardo -- an analyst for Democrats for Education Reform -- has made this case pretty emphatically.

I suppose I just have to once and for all demonstrate how the charter funding system hurts kids not in charters. I am inserting a screen shot of a simple spreadsheet for you to examine. All it is doing is taking data from the Ohio Department of Education's own funding spreadsheet (identified in the upper left cell) from the second June payment made last school year. The formulas used to make the calculations are laid out in the sheet for you to see.

In it, you can see that prior to charter schools receiving their funding, children in districts receive more money per pupil than they do after charters take their money and students.

Yes, local revenue can fill the gap. But there is, in fact, a gap. And not every district has enough local revenue to fill the entire hole. And in any case, there remains a hole in the total amount spent in the district, even with local revenue. So in many cases, districts have to cut back to make up the difference.

There are ways to ensure this doesn't happen. Direct funding of charter students is one way. Ensuring no charter student receives more per pupil funding from the state than the state would send to the child's district, then having the state make up for the lack of local money with a separate charter fund is another.

The long and short of it is this: We don't have to do it this way. I'm not trying to pit parents against each other. The current system already does a bang up job of that. 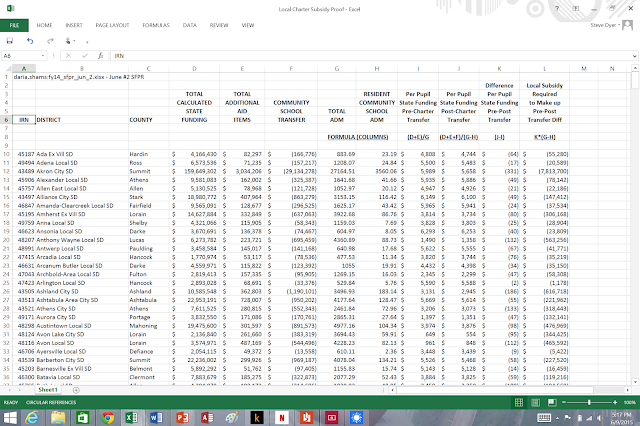