For the last two years, the stories about Ohio's mostly failing charter school system have been numerous and compelling. In addition, the scrutiny has meant that websites like Know Your Charter have shined a fresh light on Ohio's charter school performance issues. The result has been the state's first enrollment drop at charters since the 1998 bill creating them passed.

However, there was NOT a commensurate drop in overall funding to the state's charters. How could this be? Especially given many charter school advocates' pleas for a "money follows the child" system? If money truly "followed the child", shouldn't a reduction in the number of children create fewer, not more charter school resources?

However, in Ohio, we don't have that system. Instead, we have a system that has Ohio's legislature and governor protect the funding for the state's charter schools, whose operators have given millions to re-elect them. 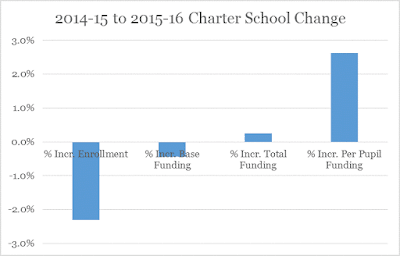 In the 2015 budget, Gov. John Kasich signed into law provisions that gave charter schools significantly more additional facilities funding (even for e-schools, which - by definition - don't have facilities), as well as bonuses for graduation and third-grade reading guarantees. The budget also deducted funding from charters for regional Educational Service Centers, just like ever other school district. (By the way, remember this fact the next time anyone says the only way to fairly compare charter performance is between charters and school buildings rather than districts, for they're paid and treated by the state as districts.)

The result was that charter schools' bottom lines were sufficiently bolstered by their 88% increase in add on funding to provide a modest increase in overall funding, as well as a 2.6% increase in per pupil state funding. So despite a significant drop in enrollment (and a far less significant drop in base funding to charters), the legislative add ons allowed for charter schools to keep their historically perfect record of annual, overall funding increases, regardless of macroeconomic realities. 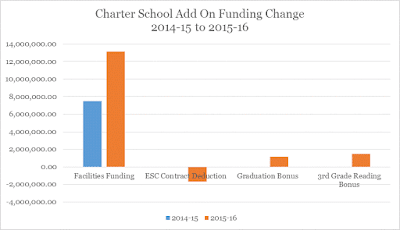 The legislative add ons will continue for this next school year as well. So I would fully expect Ohio's charters to continue receiving more funding than previous years, even if their overall enrollment continues to drop. Here is the chart showing how Ohio charter funding has continued growing, regardless of year or economy.
Posted by Stephen Dyer at 1:59 PM