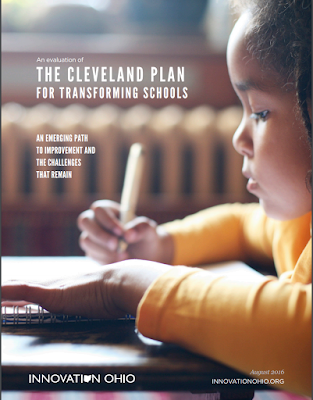 Today, we at Innovation Ohio released a comprehensive look at the so-called "Cleveland Plan". The initial look we took at the plan in 2012 led to a report that caused some much needed changes to the legislation. Our newest follow up was meant to re-examine the plan, how it's working, how it needs improved and, ultimately, some ways to fix it.

Complicating this whole thing is the specter of a teacher strike. The tensions around the union negotiations will, inevitably, color how the sides view our report. But I want to make something clear: This report was done to examine how the plan is working so that the people of Cleveland understand how important it is to pass the district's levy renewal this November. One of the major flaws with the Plan was the state never put additional investment into its components' success. So the local community has had to step up to a much greater degree than it should have had to. And it will still need to do that.

It is a credit to the people, businesses and philanthropies in Cleveland that they have stepped up for Cleveland's kids thus far. And while the labor issues pose a real threat to the Plan's future, the potential for the Plan to usher in a new era of better, more accurate teacher evaluation and pay structures should not be understated. There is great hope here, but the district and its teachers need to work this out. Quick. Because there's little question that if the levy fails in November, even the modest improvements the district has seen will quickly fall away.

We went out of our way to not use district or union data in the report (and we got plenty of it), sticking rather the state data so that we couldn't be accused of siding one way or another. While I certainly spoke with and interviewed both sides, I chose to use state-reported (and national) data to do the analysis. There will be things in the report both sides will like and not like. But I did my best to, on the data, stick with a neutral party. Though I know some will suggest otherwise. That comes with the territory.

Here's our summary of the report:

"For the first time in decades enrollment in Cleveland public schools has increased. Graduation rates have also increased and proficiency test scores have improved relative to other large urban school districts.

These are a few of the positive developments in the Cleveland schools, but many challenges still remain. Fourth grade reading and math scores have seen a slight uptick, but are still very low nationally. Excessive state funding cuts and prolonged tension between the districts' teachers and administrators have made the path forward difficult.

Our latest report examines these successes and challenges of the Cleveland Plan for Transforming Schools."