Ohio: The Mediocre Heart of it All

It seems like I write this every year when the Education Week Quality Counts report comes out. There's Ohio, right in the middle of the national rankings. Again. Yawn. 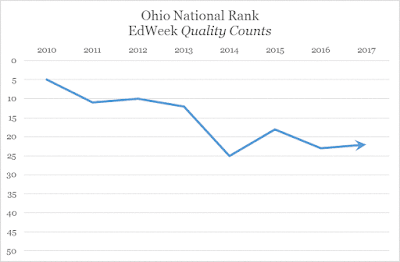 It wasn't always this way. In 2010, we ranked 5th best education system in the country.

Then in 2011, we had an historic, $1.8 billion funding cut to education -- a cut that hasn't been replaced in many parts of the state, even now, despite the state spending about $10 billion more overall than it spent in 2010.

Once again, though, the rankings demonstrate just how close Ohio came to being a national education leader rather than a laggard. In 2010, we had the Evidence Based Model of school funding -- a system that for the first time promised to reduce the state's reliance on property taxes -- the key to the state's constitutional mandate. In fact, 2010 has been the only time on record that more state than local money paid for public education. The model and other education reforms won the state the prestigious Frank Newman Award from the bipartisan Education Commission of the States, which is awarded every year to the nation's most "bold, courageous" education policy reforms of the year.

However, Gov. Kasich eliminated the EBM as one of his first acts. Since then, Ohio's rankings have plummeted.

There was one state that kept its version of the EBM. Wyoming. In 2010, that state ranked 34th nationally. Today? It's 7th. And it's the only state in the country to receive an A (A-) in school finance.