Did Anyone Vote For This? Charters Get More Per Pupil Casino Money than Districts

I've written about this before -- the idea of whether the Ohio Constitution permits charter and joint vocational schools to receive any casino money, especially given the casino provision's specific mention of public school "districts". My concerns remain.

(By the way, whenever anyone criticizes me or anyone else for comparing charter schools with school districts, I give you the interpretation that charters are to be considered school districts for the purposes of casino revenue distribution.)

However, I wonder if more people will take the argument seriously now that charters get more per pupil funding from casinos than local public school districts. Last year was the first time that happened. 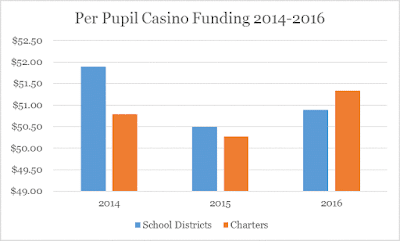 Now, the difference isn't that great. However, it is there.

As lawmakers return to handle what Gov. John Kasich has called a looming recession here, I would think one way they could address at least a little bit of the school funding issue is to re-examine whether charter schools should be receiving more per pupil funding from Ohio casinos than the school districts whose good reputations helped get the measure passed.

And this is one more area of concern with Betsy DeVos being nominated as the U.S. Secretary of Education. Her steadfast belief that charters and vouchers are better options than local public schools would seem to signal that she's perfectly fine with charters getting more per pupil money from Ohio casinos than local districts. Not sure many middle class Ohioans who voted for her boss would agree.
Posted by Stephen Dyer at 2:59 PM