Donald Trump has told the African-American community that "your schools are a disaster", so he has said Charter Schools are the answer. He's trying to demonstrate that today when he visits the Cleveland Arts & Social Sciences Academy in Cleveland.

Here's the thing. The school Trump is visiting received an F on the state report card for student growth -- the most important measure to most charter school advocates. Cleveland -- an urban district Trump has derided collectively -- received a C on the same measure. Visit www.KnowYourCharter.com to find all of the school's performance metrics. 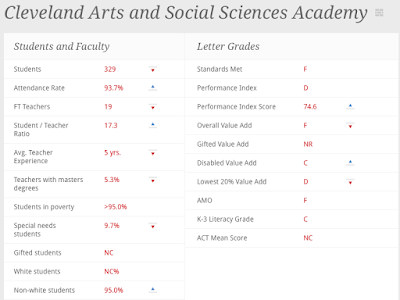 Oh, and the state pays the charter school more money per pupil than Cleveland ... for worse student growth measures.

What's sad is that Cleveland is the only place in Ohio where a case can credibly be made that charters are in any significant way living up to their promise. The Breakthrough Schools and ICAN schools are performing very well. As charter school advocates have noted, that's in stark contrast to the rest of Ohio where 40% of its charter schools are in "urgent need of improvement."

So why would Trump visit a school with an F in the most important performance metric when he had plenty of much higher performing options? Perhaps it's because the school he's visiting is run by a for-profit company called Accel Schools Ohio. Accel is an imprint of Pansophic -- a charter school firm started by K12, Inc. founder Ron Packard. Packard has an infamous reputation for political gamesmanship.

If I wanted to make the point that charters can give kids hope where none before existed, I wouldn't go visit an Accel School. I'd visit a Breakthrough or ICAN school. However, if I wanted to make hay with a potential political contributor with experience in education politics, I would visit Ron Packard's school.

However, this choice doesn't surprise me given Mr. Trump's clear ignorance of the state of education policy.
Posted by Stephen Dyer at 8:50 AM