Ohio Report Card Drives Down Performance. So What?

Amid all the hue and cry over Ohio's new, obtuse and downright head scratching Report Card results, it might be helpful to look at how performance has changed over the four years that Ohio has implemented its much-praised A-F grading system.

What is clear is that each year, report card grades stay the same, or get worse for all school and district types. However, the biggest performance drop -- by far -- has been for Ohio's school districts, which saw their percentage of Ds and Fs more than double over the last four years.

The charts below show the percentage of As, Bs and Cs each group of schools and districts received each year since 2012-2013 and their percentage of Ds and Fs. 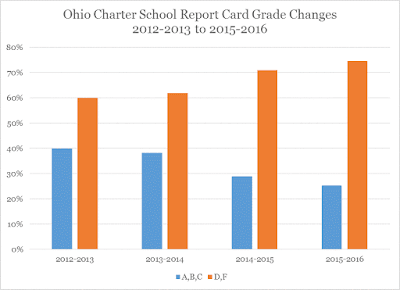 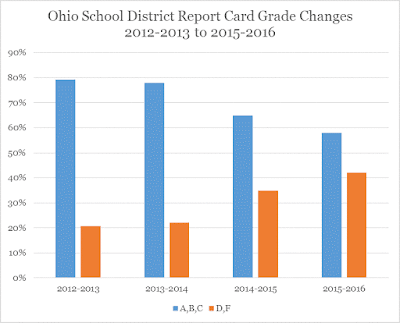 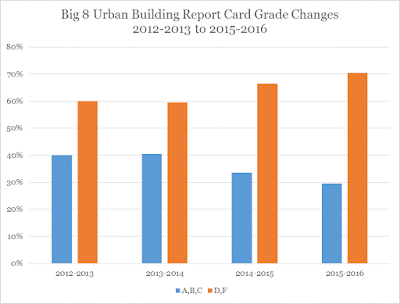 Meanwhile, even though charters did the best they had ever done in the 2012-2013 school year, with 60% of their grades being D or F, that result is still the mirror opposite of school districts' worst performance.

The only constant between the 2012-2013 report cards and the 2015-2016 version is Ohio charter schools continue to be vastly outperformed by their school district counterparts (remember that all but 2 Ohio school districts lost students and funding to charters last school year). And now, unlike four years ago, we can say that Big 8 Urban buildings -- overall -- outperform charters in a meaningful way.

Regardless of school type results, what these historic data show is just how illogical the report card has become. Does common sense tell you that school districts today are twice as ineffective as four years ago, or even that 3 out of 4 times, charters are failing?

To hear the report card defenders, all this indicates is that our standards are getting tougher.

Never mind we've had three different state assessments the last three years. Don't think that matters? In 2012-2013 and 2013-2014 we had the same tests. Is it a surprise that the results are nearly identical each year? Now they are wildly different.

Never mind that it is illogical to assume that worse grades mean standards are tougher or results are more accurate -- a narrative thread I strongly oppose.

Never mind that if I developed a test in my class that I knew significant numbers of students would fail (like we were told these new Ohio assessments would do), I would be disciplined for developing a bad, unfair test.

What matters most to Ohio policymakers, it appears, is that we are finally getting some data that indicate Ohio school districts are failing kids almost as often as politicians have been telling us they have been failing for years. If the report card is meant to support a political narrative that public schools are failing kids and we need more choices, regardless of those choices' quality, then the report cards are doing that job better than ever.

But if they're meant to actually give the public a better, more accurate notion of what's happening in Ohio classrooms? Well, I'm afraid that on that account, the report cards would get a big, fat F.
Posted by Stephen Dyer at 4:03 PM