When an F isn't an F

Yesterday, I posted about how Donald Trump was visiting a Cleveland charter school that received an F on the state report card for student growth -- a grade I called "failing" in several press accounts. And, in fact, I found it curious that Trump would visit a Cleveland charter with such a poor student growth grade given that Cleveland is the only area of the state where there are several high-performing charters. 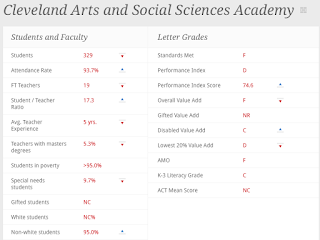 I suggested that it was because Ron Packard -- a notorious political operative in the education space -- ran the for-profit company that operates the school. And, right on cue, Trump shouted out Packard at the beginning of his speech. I'm willing to bet that a Packard donation will show up in Trump's next campaign finance report.

Anyway, some charter advocates, especially Aaron Churchill at the Fordham Institute, pushed back against my characterization of the Cleveland charter as "failing" because it's only based on one year of data. And the previous year, the school performed well.

As I've said before, I really respect Aaron, but he's trying to do a do-over here on Ohio's accountability system -- a system he and Fordham pushed to have in place.

Fordham and Aaron championed our state's switch to an A-F report card system because "The A-F grades provide a clear and transparent way of reporting whether a school is academically strong, weak, or somewhere in between." This is also the same group that announced that the drop in state scores last year for many schools due to the PARCC exams and tougher Common Core standards was a better indication of how the students (and schools) "actually performed." (I vehemently disagreed with that assumption, by the way.)

Unless, it appears, Donald Trump decides to visit a charter school with an F in student growth. Then they'll make excuses.

I've said repeatedly that basing performance solely on test scores, as Ohio (and the country) currently does, is folly and wholly unfair to schools whose performance shouldn't be judged on how kids do during a few hours of testing when they spend more than 1,000 hours in school. But we have this high-stakes system in place. And it is there in no small measure due to the shaming of our public schools, which has been perpetrated by Fordham and others over the years.

And under the system Fordham and other reformers have trumpeted for years, the charter Trump visited yesterday failed to grow student learning as effectively as the Cleveland Municipal School District. And, in fact, the school got an F, which is a failing grade in anyone's book.

Fordham and others in their camp don't get to suddenly adopt a nuanced approach to school performance just because the schools they like failed.

I welcome the more nuanced approach and understanding of school performance. And I'd be less skeptical if Fordham and other education reformers hadn't spent the last 20 years trying to get the no excuses, un-nuanced system we have in place today.

In the words of Mike Brady from A Very Brady Sequel, "Caveat Emptor."