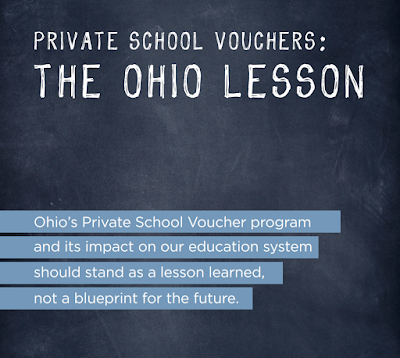 The House Appropriations Subcommittee on Labor, Health and Human Services, Education and Related Agencies reported out a bill that did eliminate teacher support programs at the U.S. Department of Education -- a really bad outcome that will have long-term consequences for kids. But it did not head the nation down the road Ohio took 20 years ago.

Last school year, Ohio taxpayers sent about $568 million to private, mostly religious schools in the form of private school vouchers, busing, administrative cost reimbursements and auxiliary services. This despite the fact that several new studies show that kids who take vouchers do worse on achievement tests after they take the voucher than they did before taking it.

We at Innovation Ohio examined our state's voucher program recently and urged lawmakers to back off from more widely implementing these programs here and across the nation. While it looks like the subcommittee took heed of the mountains of evidence that demonstrate these programs hurt kids who take the vouchers and kids who don't because of the large sums of money these program eliminate from the public system, the bill still has a ways to go.

And the subcommittee did increase funding by about 8 percent for the department's Charter School Program (CSP), which in Ohio has not been very successful at expanding better educational options for kids.

Here's what we found in the report we did at www.KnowYourCharter.com last year:


One very telling detail of the subcommittee meeting yesterday, though, was this final line from the74.org's account:

"Members did not discuss the school choice plans during the meeting."