Trump Won't Appoint Anyone at U.S. Department of Education 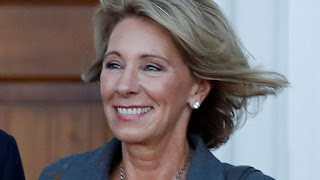 After President Donald Trump appointed school privatizer Betsy DeVos to be the U.S Secretary of Education, despite the fact she had never spent a day teaching a kid or leading educators, there was a great uproar over her lack of qualifications and other issues (including her inability to comprehend the difference between how well students do on tests vs. how much better they are doing on tests).

Since then, people have generally turned away from the Department and focused on other things.

However, in what has become a pattern with Donald Trump's administration, there has yet to be a single Assistant U.S. Secretary of Education appointed to the Department. In fact, only one other appointment has been made by the President to take any senior leadership positions at the Department. There are more Obama era holdovers than Trump appointees. Of 31 senior positions, only 2 are occupied by Trump appointees. Obama holdovers occupy 7 and the remaining 22 are vacant. That's right. There is a 71 percent vacancy rate in senior level positions at the U.S. Department of Education, which is responsible for overseeing the education of roughly 74 million American kids.

Here is the list of senior level positions, as listed by the Department: 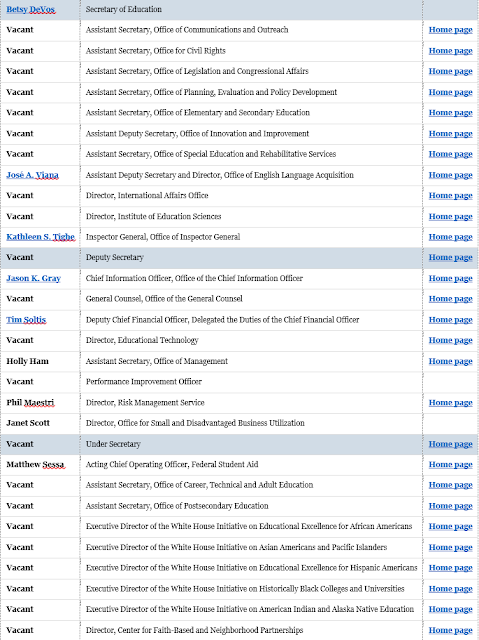 So, what does this mean that only the Assistant Deputy Secretary and Director, Office of English Language Acquisition has been thus far appointed by Trump?

It means the Department is all Betsy DeVos. That's it. No sharing of responsibility or authority. No subject matter expertise. No collaborative decision making. It's simply Donald Trump, Betsy DeVos, and a handful of Obama era holdovers.

For years now Republicans have made the Department of Education their favorite bureaucratic elimination target.

Even Rick Perry remembered he wanted to eliminate the Department during his infamous "Oops" moment during the 2012 debate season.

It appears that Trump has decided to let the Department wither on the vine, consolidate the power in the hand of a single person who is historically under qualified for the position and (like his comments on Obamacare this week), just let the Department die.

While I have certainly disagreed with federal interference in education policy over the years, I believe there is a role for the Department to play, especially when it comes to funding. Many areas of the country fund their education systems less effectively than others. The federal government can help equalize that difference to a great degree so that all Americans, regardless of where they live can achieve the American Dream.

Head Start has done some really good things for many kids. Title I has generally helped rescue public education funding in many areas of the country, though its overall success is mixed. The IDEA has revolutionized the way we educate special education kids and the expectations we have on educators to meet their needs.

The department's refusal to recognize the serious problems it's had on charter schools and other education reform efforts has somewhat tempered their successes. But I would never say that the federal government shouldn't have any role to play in American education policy. Especially when every other industrialized nation involves itself this way. The inherent Balkanization of American states is what led to the death of the Articles of Confederation, after all.

Clearly, Trump is trying to consolidate power in as few hands as possible. And when those hands are as uncertain as Secretary DeVos', what you have is, by default, the President running federal education policy.