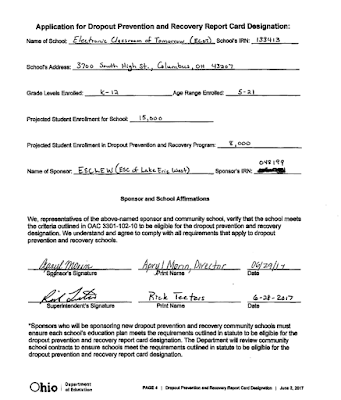 Look, I know you shouldn't judge a book by its cover, but would you look at the "application" the Electronic Classroom of Tomorrow filled out to become a dropout recovery school so it could escape scrutiny and continue collecting hundreds of millions of our hard-earned tax dollars while continuing to be the nation's top producer of dropouts?

And look at the school's population estimates: 15,000 total students and 8,000 dropout program participants. Really? Perfectly round numbers? Don't the people of ECOT have actual enrollment figures, complete with the students' ages? It sure seems to me that they're kind of spitballing this.

They actually scratched out their sponsor's identification number, wrote out the number above the scratched out number ... AND TURNED IT IN!

What, there wasn't any Wite-Out available? Man, $100 million doesn't pay for what it used to, I guess.

Would you let your kids turn in this work to their teacher?

ECOT not only turned this in to ODE, but the school could receive hundreds of millions of taxpayer dollars as a result.

I don't know. I kind of expected more from ODE's application process. If you can apply to become a dropout recovery school and essentially escape all accountability and scrutiny, shouldn't it be a little more rigorous than something that looks like it was written on the back of a napkin? Or at least didn't have grammar school errors on it?

Am I just sensitive?

Or is this just par for the course for a school that owes Ohio taxpayers $60 million because it couldn't prove it educated 60 percent of the kids it claimed to educate in the 2015-2016 school year?