I know that some have criticized me and others for comparing the woeful performance of Ohio's charter schools with the performance of all of Ohio's school districts. They claim it's unfair to compare the two (even though just about 1/2 of all the students and money going to charter schools in the 2016-2017 school year came from districts outside Ohio's 8 major urban districts -- Akron, Canton, Cincinnati, Cleveland, Columbus, Dayton, Toledo and Youngstown), even boldly saying that taking outside students into account is "preposterous".

And while I've stated for a long time that under Ohio law, charters are considered districts for funding, accountability and federal grant making purposes, and that many of the highest performing charters in the state take significant portions of their kids from outside the urban district in which they reside, I don't wish to litigate this battle.

So, as an exercise, let's grant the advocates their point for a moment and look at urban district buildings, shall we?

Here's what we find:

Here's the issue though: 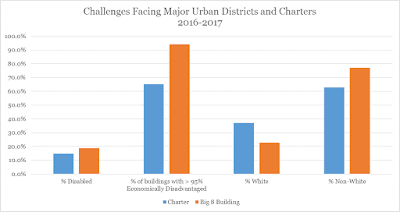 Yet despite these greater challenges, Ohio's major urban buildings typically have nearly identical attendance rates, slightly less chronic absenteeism and just about equal report card performance, looking at percentages of A, B, C, D, and F grades. Charters have slightly higher percentages of As, Bs and Cs, and lower percentages of Ds and Fs, but the difference is statistically insignificant. 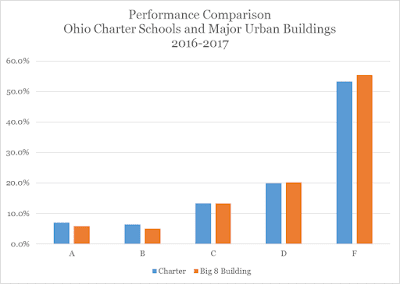 So despite the fact charters have fewer demographic barriers to success on our test-based report card and about half of their kids don't even come from the urban districts, charters are still unable to perform significantly better than their major urban counterparts -- the most challenged group of schools in the traditional public school system.

Only about 260 of Ohio's 370 charters are included in this comparison. It's clear that the other 90 -- mostly dropout recovery schools located in urban districts -- are among the worst-performing schools in the entire country. So the percentage of poor charter grades is likely far higher than the comparison I'm currently making.

The bottom line is this: Ohio charter advocates want to only compare charter school performance with major urban district buildings.

Though I disagree with that approach, even if you grant the advocates the benefit of the doubt and do that comparison, Ohio's major urban buildings (who struggle far too mightily and should greatly concern us) still hold their own with their "free market" competitors, despite the 90 worst performing competitors not even being included in the competitors' ratings. Imagine, if you will, how much better Ohio's major urban district buildings would perform overall if the state would not count the bottom 24.3 percent of performers, as they currently exclude for charters. Yet urban district buildings do this while typically facing a more challenged student population. 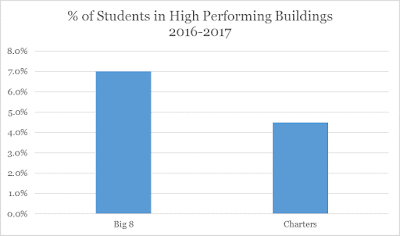 Oh, and one more thing: Children in Ohio's urban districts are nearly twice as likely to be in a building that's classified by the state as "high performing" than children in charter schools.

So, about those major urban district buildings.

How, exactly, is Ohio's charter school sector providing the meaningful, quality urban education reform we'd all like to see and were promised would come 20 years ago?
Posted by Stephen Dyer at 3:12 PM