I've noticed recently that many have started the "let's get off the four-year degree obsession" and instead encourage kids to go for two-year certificates or Associate's degrees. The American Enterprise Institute is the latest pushing this theme. I agree that two-year degrees and certificates are better than nothing and are a sound decision for many kids, but I have a tough time just resigning our country to the premise that we should just accept fewer kids getting four-year degrees because of this chart from the U.S. Census Bureau: 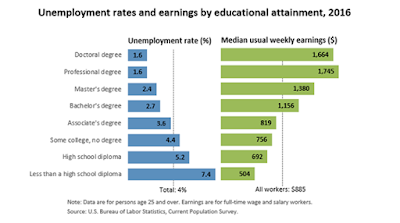 But the nature of public policy is to ensure the greatest opportunity for the most people. And making four-year degrees the expectation for as many kids as possible grants kids, literally, a $1 million opportunity over their lifetime.

But what really gets me is this: None of these studies are offering solutions to increase access to the four-year degree; it's simply lowering the bar and trying to rationalize why we should focus more on the two-year track.

A major reason kids go for two-year degrees over four-year degrees is cost. It's too hard for kids, especially those without a ton of means, to afford college. Especially if they don't have 4.0 GPAs. But kids with Bs and Cs in high school can succeed in a four-year program.

I see it every day when I teach freshman composition at the University of Akron.

Yet the scholarship opportunities for these students just aren't there. So we force them to go into massive debt, work several jobs, or lower their expectations and go for a two-year degree. Then we have places like the American Enterprise Institute try to make that sound like not just a good outcome, but one that represents good, sound policy.

But all we're doing is resigning less wealthy students to lesser opportunity when we should be affording them more opportunity by reducing the financial barriers to the four-year degree. Because as much as we want to argue that two-year degrees are just fine for families and kids who don't have the means to access a four-year degree, I'm looking at the chart to the left and find a strong correlation between a state's median household income and its educational attainment. And, in fact, the correlation coefficient of those two columns is 0.83 -- a strong correlation, though not perfect. This means the greater the percentage of Bachelor's degrees, the greater the income.

In short, getting more people into the middle class necessarily means a greater public policy commitment to increase access to the four-year degree. While two-year degrees and vocational training can help, I'm even concerned about the long-term viability of some vocational skills, given the rapid development of robotic alternatives. We should, though, stop merely talking about the importance of a four-year degree and instead actually fund those opportunities so every kid can access this million dollar dream.

For example, in 1975, Ohio spent more than 15.7 percent of its state budget on higher education. Today, it's about 1/3 the percentage. Ohio is not alone in its de-commitment to the four-year degree. But investing in our state's and nation's youth is as sound an economic development investment as there is.

Why we don't do it more than we do is beyond me.
Posted by Stephen Dyer at 2:23 PM