The latest Ohio Charter School Sponsor evaluations are out, and once again there are serious incongruities with overall and academic ratings. Some of the sponsors (non-profit organizations that oversee Ohio's charter schools) with the highest academic ratings may be forced to close as soon as next year because their overall rating is poor or ineffective.

Meanwhile, some sponsors with effective ratings -- meaning they can keep taking on more charter schools -- have D or F grades for academics.

This system comes from House Bill 2 -- Ohio's most far-reaching attempt to reform its nationally ridiculed charter school system. The goal of the evaluation system was to put the screws to the non-profit sponsors, which are supposed to ensure the academic performance of its charter schools, but had mostly just been interested in collecting their 3 percent fees from the schools and let the schools do whatever.

The evaluations rate sponsors on a four-tier scale. The tiers from top to bottom are: Exemplary, Effective, Ineffective and Poor. If they rate in the top two categories, they can keep running charter schools. Rate in the bottom two and they may be forced to shut down. But it looks like there remain kinks in the evaluation system -- kinks I was concerned about from the very beginning of the House Bill 2 debate, despite my overall support for the bill.

What you can see in the chart to the left is a couple things: 1) All the highest rated academic sponsors are public entities -- primarily school districts and 2) While 6 of the 9 highest rated academic performers received an effective or exemplary rating, 2 were deemed ineffective and one was rated poor, meaning it will be banned from operating anymore as a sponsor.

This outcome is not in the spirit of House Bill 2 -- the landmark charter school reform law that set up this system. However, it is in the actual law. Why? Because there are three elements to the sponsor rating -- academics, adherence to current Ohio regulations and compliance with national sponsor standards set by the national charter school sponsor lobbying organization.

Sounds fair, right? Except all three measures have to be weighed equally under the law. Quick, what's your GPA if you get an A and two Fs? Right. B-. But what if you're an English major and you get Fs in Shakespeare and Chaucer and your A is in Bowling? Shouldn't it matter that you're failing at your primary function? Likewise, what if you're getting an A in Shakespeare, but you get Fs in Calculus and Chemistry?

I see the state's charter school sponsors' primary job as ensuring the academic quality of the schools they oversee. If they can dot their bureaucratic i's and cross those t's, fine. But it doesn't matter nearly as much to me as whether their kids are learning.

This is why I've pushed for greater importance to be placed on the Academic portion of the evaluation than the other two, mostly bureaucratic, portions. This way, Scioto County Career Technical Center could still sponsor its school because the school is doing very well. The Department of Education could then work with the sponsor to help dot its i's a little better. But shutting down one of only 8 out of 45 Ohio charter sponsors to receive an A for academics seems misguided and prime bureaucratic bungling. 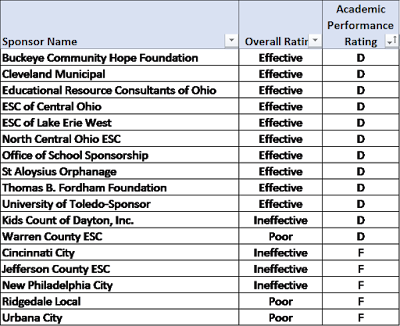 Likewise, I would like to see sponsors with D or F ratings not be able to be considered Effective, thereby being allowed to open more charter schools.

I understand that many of these poorly rated sponsors have far more schools than the ones with higher academic ratings. However, there is also an argument to be made that with more schools, there's more leeway for failure -- one school's failure shouldn't be as important if you have 20 others that don't. Sponsors with one school sink or swim with that one school's performance.

This tells me that academically poor performing sponsors have figured out the GPA conundrum I mentioned earlier, and that if they simply pay more attention to bureaucratic details, their academic performance won't matter. That's because academics are only 1/3 of your rating. Bureaucracy is worth 2/3 of your rating.

I have said and will continue to say that a sponsor's academic rating should count for 50 percent of a sponsor's grade, with the other two counting 25 percent each.

Until this adjustment (or something like it) is made, we will continue to put some of the best academic performing sponsors on notice and let slide many of the worst performers.
Posted by Stephen Dyer at 3:00 PM