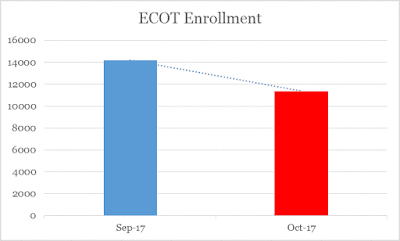 It appears that the Electronic Classroom of Tomorrow -- the state's first and (maybe) largest online school and nation's largest dropout factory -- has adjusted its enrollment figures to adapt to the Ohio Department of Education's newfound interest in verifying their students.

ECOT was found to have overinflated its student counts by 60 percent in the 2015-2016 school year and 20 percent last school year. The state now says ECOT owes taxpayers more than $80 million in back payments for those two school years.

However, it does appear that this year's enrollment drop, which came after after ECOT's annual October headcount performed by the Ohio Department of Education, matches up with what ODE determined was last year's enrollment inflation at ECOT.

Prior to October's count, ECOT was being funded for 14,209 students. After the October count, that number dropped to 11,382. ODE has not posted the detailed, grade-level October headcounts yet for this year.

These detailed data have increased importance this school year for ECOT because they have a preliminary "Dropout Recovery and Prevention" status, which grants them much easier accountability standards, allowing them and their sponsor -- the Educational Service Center of Lake Erie West -- to keep operating and collecting large sums of taxpayer funding with little consequence for the school's putrid performance.

However, the school has to show that more than half of their students are older than 16 and enrolled in a dropout prevention or recovery program or are in "crisis". Previous years' counts show that ECOT likely would not have met the requirement because it had too many students younger than 16. The October count could clarify whether the school would meet the requirements for the lower academic standards.

The enrollment drop means that ECOT, which was slated to receive $73.6 million after paying back taxpayers for the overbilling issue, will now receive $53.9 million.

ECOT is suing the state to keep ODE from clawing back the $80 million it took from taxpayers for kids it couldn't prove were actually participating in education programs at ECOT. The school has said that if it is forced to make the payments, it will have to shut down in December.