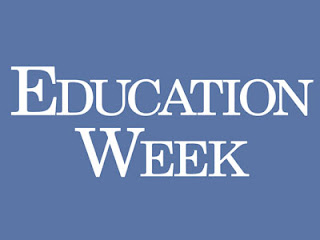 Some out there think this doesn't mean much because of changes in the way Education Week has rated state school systems, but once again, Ohio ranks 22nd nationally for education excellence among the 50 states in EdWeek's annual Quality Counts report, down from 5th in 2010.

I tend to think that dropping from 5th to 22nd is kind of a bad thing. But my friends at Fordham are defending the drop, even suggesting it's not even a drop at all. Why? Because EdWeek changed the way it calculated quality between 2010 and 2018. To suggest the drop is an issue is "intellectually dishonest," they claim.

So, for example, the de-emphasizing of standards and the fact other states caught up to us on those measures means that really we were probably 22nd back in 2010, just as we are today. At least, that's their argument.

Beyond the rank speculation that entails, it completely ignores one incredibly important fact: In 2009, Ohio had adopted the Evidence Based Model of school funding, which promised an additional $3.1 billion in state funding over the next 10 years. Full disclosure, I helped improve and pass the EBM in 2009 while serving as chairman of the Primary and Secondary Education Subcommittee on the House Finance and Appropriations Committee.

However, because Democrats had created the funding model, newly minted Republican Gov. John Kasich, fulfilling a campaign promise, came into office with less than 50% of the vote and immediately eliminated the EBM, crushing any hope that Ohioans had of actually meeting the state's constitutional mandate of providing a thorough and efficient system of public common schools.

Not only did he fail to fulfill the $3.1 billion promise, he immediately cut $1.8 billion from education and continues to provide less funding today, adjusted for inflation, than was provided to kids in districts during the Great Recession. All while the state's biennial budget has ballooned from $50 billion in 2009 to about $65 billion last year.

One other state in 2010 had adopted the EBM -- Wyoming. Since 2010, Wyoming has jumped in the Quality Counts rankings from 33rd to 7th in 2018. A major driver of that improvement has been Wyoming's continued and significant commitment to funding its schools equitably and adequately. In fact, it's the only state in the union that received an A in education finance (a category that remains the same in both years) from Quality Counts in 2018.

Wyoming -- the most conservative state in the union. I know, right? 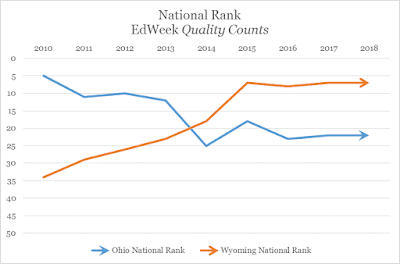 If Ohio had stuck with its funding plan from 2010, there is little doubt that this state today would rank up with -- and possibly higher than --  Wyoming overall. Ohio's education finance score is 3.8 percent lower today than it was in 2010, when Ohio actually earned a B for equity, but because of the Recession, Ohio ranked low on adequacy in 2010.

If its score was the same as Wyoming's today, rather than 16 points lower, that would easily offset any of the changes Fordham and others try to use to excuse the state's drop.

This is not a matter of speculation.

If Ohio had stayed on its funding path from 2010, the state would be ranked far higher today than it currently is. And, more importantly, Ohio's students would have more access to the world-class educations they deserve, regardless of where they live.

That's not being intellectually dishonest.

It is telling the truth.
Posted by Stephen Dyer at 11:42 AM