ECOT in receivership? ECOT paid more to for-profit companies owned by political donor than its teachers

So now the Electronic Classroom of Tomorrow's sponsor, the Educational Service Center of Lake Erie West, wants to put ECOT in receivership to ensure the business can be properly wound down.

I'm fascinated by this "ECOT has no money" claim. Because by all counts, they should have plenty. Why do I say this? Because, as I have written before, even after ECOT loses its monthly, $2.5 million repayment (because it billed taxpayers for $60 million more than it should have in the 2015-2016 school year), the state pays ECOT $4,831.30 per pupil. That’s more than the state pays to educate kids in 265 of Ohio’s 613 school districts.

However, it still has to pay its for-profit companies that run the school and provide the software for the school's operations. These companies are run by William Lager -- the big-time political donor.

How much is that? Well, in the four most recent state audits, Lager's companies end up receiving about $20.9 million a year.

Ah ha. So that is the problem! See, Lager needs to have his cut. And if Lager can't get his cut, well, forget the kids and parents, the school must close. 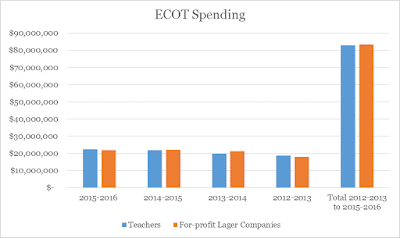 Here's the amazing thing. Between 2012-2013 and 2015-2016 (the school's most recent audited school year), Lager's for-profit companies received $83.6 million in public funds. Meanwhile, ECOT only paid $82.9 million for its teachers during the same period.

This is the problem with for-profit companies running schools. The schools end up paying more to the companies than the teachers.

Perhaps if Lager had settled for less of a cut or profit, ECOT parents wouldn't be scrambling today? Of course, that would have meant fewer potential donations to Ohio politicians. And we can't have that now, can we?
Posted by Stephen Dyer at 2:32 PM