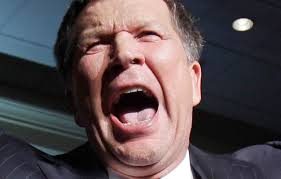 The image of Ohio Gov. John Kasich has shall we say "evolved" since he first took office. Within days of his 2010 election, he gave a famous speech where he warned Columbus lobbyists that his agenda would be unstoppable. He summed it up this way:

"If you’re not on the bus, we’ll run over you with the bus. And I’m not kidding."

Two months later, he told a room full of people about a story of being pulled over for not giving a passing ambulance the right of way. He called the officer who dared pull him over an "idiot."

A few months later, he passed Senate Bill 5 -- the most direct and serious attack on union rights mounted in the state for generations. But when organizers collected more than 1 million signatures and voters roundly defeated his legislation at the ballot box almost a year after his election, he started "mellowing".

And running for President.

As the last man standing against Donald Trump in the 2016 Republican primary, Kasich turned into a bit of a fuzzy warm reminder for some of what "reasonable" Republicans were -- hearkening to a time when Eisenhower could carry the Republican banner without being drummed out of office. His latest book "Two Paths" is supposed to be the marker for all reasonable Republicans who want to get things done.

But John the Vindictive has not really changed. And House Bill 512 proves it. According to a Plain Dealer story yesterday, John Kasich and current Superintendent for Public Instruction Paolo DeMaria have not met since DeMaria was named Superintendent in 2016. Nearly two years and the Governor hasn't met with the man responsible for the education of 1.8 million Ohio children?

It makes one wonder if Kasich wasn't happy with DeMaria's selection as State Superintendent. And maybe explains why he wants more control over the pick. DeMaria, after all, was a late addition to the finalists list for State Superintendent, indicating he wasn't Kasich's first choice.


"What I really want...I want to be able to run the Department of Education," Kasich said an at Associated Press forum February 2.  "I don't think we should have this elected school board."

Could it be that Kasich instead supported Reynoldsburg Superintendent Tina Thomas-Manning, who famously put in scab teachers to fight the Reynoldsburg teacher strike? In a Plain Dealer story that reviewed the strike, her relationship with Kasich was described this way:


"Some even view Thomas-Manning, superintendent of the Reynoldsburg school district, as a puppet of Gov. John Kasich and former state Superintendent Richard Ross."

Trouble was, at the time the board was considering Thomas-Manning, the Reynoldsburg Superintendent was in a full out war with her Board of Education, with members calling for her to step down in the aftermath of the strike that tore apart the Reynoldsburg community. Not a good look if you're asking another board to hire you.

Thomas-Manning eventually did not have her contract renewed and received a $100,000 golden parachute from the Reynoldsburg Board of Education. Yet she continued to do consulting work for the district as recently as last fall.

Whatever the backroom dealings, it's clear that Kasich is pushing HB 512 to punish the department for something, or some things. One is clearly the board and superintendent's role in closing down the Electronic Classroom of Tomorrow -- a huge, online charter school run by major political donor Bill Lager.

Kasich's first high school graduation address was to ECOT in 2011.

But it appears that Kasich's indifference to the State Superintendent of Public Instruction may have additional roots in DeMaria's unanimous selection as Superintendent by the State Board. And reveal Kasich's real desire to get a more divisive, loyal, union-busting figure at the department. This was the guy who tried to destroy the teachers unions with Senate Bill 5, after all.

But the bottom line is this: With HB 512, it appears that the State Board of Education -- and the voters who put 11 of them in office -- are the latest to be run over by John the Vindictive's bus.
Posted by Stephen Dyer at 12:15 PM