Every time I write about the state report card, I do so with some trepidation because I don't think they're a true barometer of success, as I've said on many occasions. However, I do believe they can show us general trends about 50,000 foot views on students success. 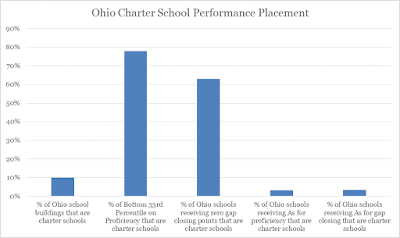 Of the 71 school buildings that received zero gap closing points, 45 were charter schools, which means that nearly 13 percent of all charters received zero points for closing achievement gaps.

Of the 281 buildings that received A grades for Performance Index, only 9 were charter schools. Again, charters are about 10 percent of all buildings, but only are 3 percent of the top scoring buildings on proficiency.

Meanwhile, of the 1,144 school buildings that received an A on Gap Closing, only 40 (3.5 percent) were charter schools, which means only about 11 percent of Ohio charter schools rank among the state's best schools for closing achievement gaps.

Needless to say, it should concern many that Ohio charter schools dominate the bottom rankings among Ohio's school buildings and appear only 1/3 as frequently as their numbers suggest they should on the top end of the performance scale.