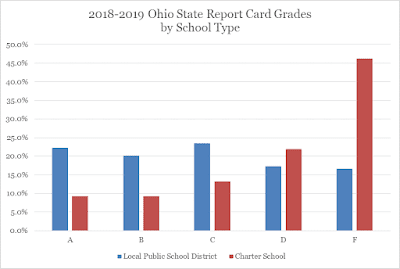 As for school districts, they improved their percentage of As in 8 of 14 graded categories and lowered their rate of Fs in 11 of 14 categories. The biggest area of improvement came in graduation rates and closing achievment gaps. However, their biggest drop off was in student growth where last year nearly 1/2 of all districts received As. This year, only 13 percent did. We'll have to look at that more closely to discover why.

Only 4 districts received overall grades of F this year -- at 0.7%, a far better rate than Ohio charter schools' 28%. However, one of those 4 is Youngstown, which is under the Academic Distress Commission. This means that the district will now have to transition to a mayor-appointed academic distress commission Jan. 1 through a complicated process. So that's another issue that could perhaps be fixed through the apparently fast-moving distress commission reform now being discussed in the Ohio Senate.

But overall, Ohio's districts are improving in far more measures than they are slipping, and the continued strong showing in closing achievement gaps is encouraging.

However, this is where I reiterate again that these report cards are almost singularly reliant on scores earned on standardized, high-stakes tests that are notoriously tied to poverty. So while we're seeing improvements, the fact remains that the poorer your students, the less successful you will appear on this report card. That has always been true and will likley be true as long as tests that are taken for a few days during the year and are great at measuring poverty continue to be used to judge the 180-day educational experiences of children.