New Report Cards: Ohio Districts Get More As Than Any Other Grade

The new Ohio Report Cards came out today. Detailed spreadsheets aren't available until this afternoon, but the initial District Report Cards were released. What they showed is that this year, districts received more As overall than any other grade. Last year, As were the third-largest grade. And the As outdid other grades by a large margin, nearly 3%. Last year, it was a tenths of a percent difference between As, Bs, and Cs.

This year also saw a slight increase in the number of Ds and Fs, but there are still fewer Ds and Fs combined in Ohio's public school districts than there are As, Bs, or Cs singly. 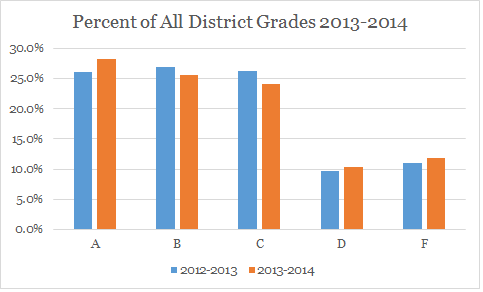