A more apt comparison would seem to be between Charters that take all their kids from the urban core vs. urban core traditional buildings. What's amazing is this: Of the 300 Charter Schools graded on the State Report Card (not including the state's 100 or so dropout recovery schools), only 84 took 95% or more of their kids from the state's big 8 urban districts (Akron, Canton, Cincinnati, Cleveland, Columbus, Dayton, Toledo and Youngstown) during the 2012-2013 school year (the most recent data I have). None of those 84 buildings are located in Canton. Of the 248 Charter School buildings located in the counties of the Big 8 urbans, about 1/3 take 95% or more of their kids from the Big 8 urban districts.

Franklin County's a perfect example of this phenomenon. Of the 72 Charter Schools located there, only 12 took 95% or more of their kids from Columbus City Schools in the 2012-2013 school year. 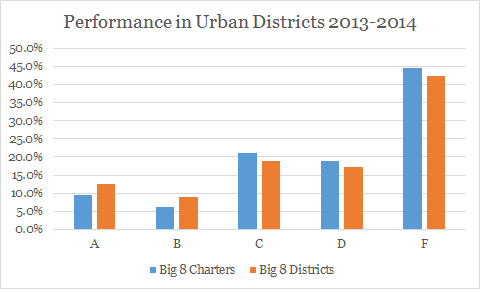 Big 8 urbans outperform their Charter School counterparts on As and Bs and get smaller percentages of Ds and Fs. But perhaps the greatest disparity is in Performance Index Score -- the closest thing Ohio has to an overall school grade at this point. 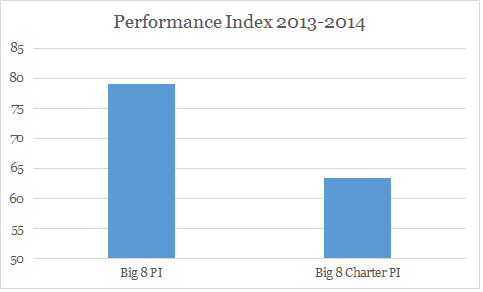 The average urban building PI score was 79.05. The average Charter PI score was 63.45. To give you a sense of scale on what a 15.6-point difference in PI scores means, Wyoming City received the highest PI score of any district last year -- a 113.013. There are 429 (of 613) school districts between Wyoming and the district that is a bigger than 15.6-point drop.

In other words, a 15.6-point difference is enormous.

It should also be made clear that urban district performance isn't any great shakes (more than 40% of their scores are Fs and barely more than 20% are As and Bs, after all), but even that performance is better than Charters, and in the case of Performance Index, much better.

Can we have a discussion of quality charters? Please? Our kids need it.

Charters were supposed to improve performance. Instead, they're performing worse, even in the communities where they were supposed to have the most profound effects. Sixteen years and $7.4 billion into this experiment, shouldn't we be getting better results?
Posted by Stephen Dyer at 12:47 PM