Yesterday, I went over how charter failures hurt kids in local school districts, as well as how much worse Ohio charters perform compared with those districts. Today, I'm going to deal with some of the excuses for charter school failures.

Claim: Charter schools struggle because their populations are so much more challenging than districts'.

Here are the performance comparison between charters and districts with greater percentages of poverty, special education and minorities. 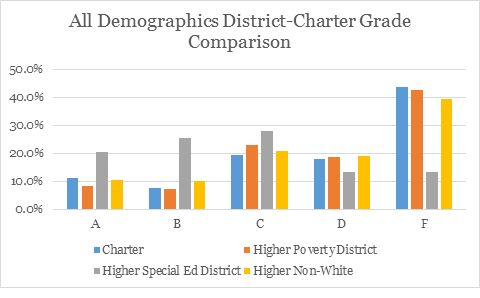 In every category, districts with higher percentages of poverty, special education and minorities have a greater percentage of As, Bs and Cs.

Claim: Charter schools should be only compared with Ohio's urban districts because they have similar populations. 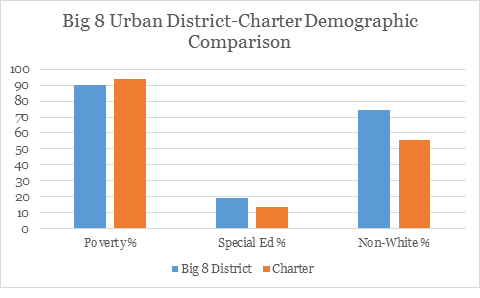 As you can see, charters have slightly higher poverty rate, but far fewer special education children and far fewer minorities than the urban districts.

Yet despite urban districts' greater overall challenges, urban districts actually score higher on the state's proficiency metric -- the Performance Index Score, which is most influenced by demographic challenges.