Ohio Charter Schools Just Don't Work, Except When They Do, Part IV

For the first three parts of my series on Ohio charters, I've dealt primarily with the charter sector's overall failings. How about a half billion dollars goes to charters that perform the same or worse on state report card measures. Or how the excuses some charter school proponents posit for these failings don't explain the issues. Or how even looking at how charters perform against big urban school buildings, their performance is lacking.

However, while the sector overall is lacking, there are some high-performing charters in Ohio. Not many considering that we're nearly spending $1 billion on charters. But they are out there. However, what is fascinating is this: About 40% of them take less than 1/2 of their students from the state's urban core. And when looking at the highest performing charters and comparing them with the highest performing urban buildings, the urban buildings hold their own -- doing better than the charters on report card measures and only slightly better on proficiency test scores.

In other words, even though there are high performing charters, their performance isn't quite as good as the highest performing public school buildings in the state -- even those in the state's urban core (which I define as the so-called "Big 8" of Akron, Canton, Cincinnati, Cleveland, Columbus, Dayton, Toledo and Youngstown). But let's look at the high performers and see what seems to be working for them.

First of all, what I'm calling "high performing" is a school (or district) that scores above the state average Performance Index Score (which measures straight proficiency test results) or grades at an A or B on overall student growth. These criteria are more stringent than the proposed "high performing" language in House Bill 2. Looking at these tougher metrics, already you can see the fundamental story: Far fewer charters than school districts meet them. 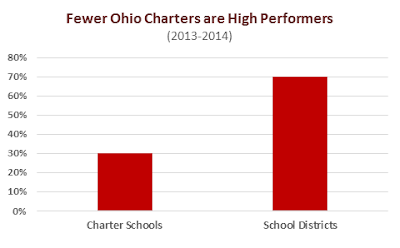 In fact, more than double the percentage of school districts meet this "high performing" criteria I've designated. Once again, this points out just how far behind Ohio charters are on the whole.

But since we've already dealt with the performance failures of charters, let's examine how those 111 high-performing charters perform. 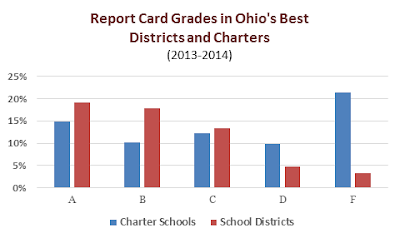 As I've mentioned in several posts now, it's important to realize that Ohio charter schools get 55% of their kids from Ohio's urban core. The remaining 45% do not come from there. In fact, more kids go to charters in Ohio's Appalachian counties than Dayton and Cincinnati combined.

So it is absolutely fair to examine charter and district performance outside the state's urban core. For if the charter sector takes money and students from every Ohio school district, it is only fair that their performance be compared with every school district.

And, in fact, the state's highest performing charters share this same issue. That's because there are 44 of the 111 high performers that take less than 1/2 of their students from Ohio's urban districts. 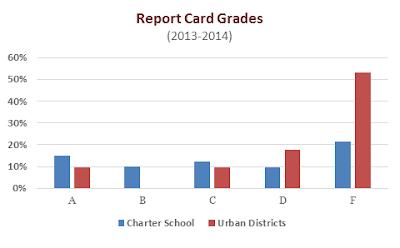 One interesting note, though, is that while high performing charter performance is clearly superior to urban districts on the report card, they score 10 points lower on the state's Performance Index Score. So the dominance is not complete. 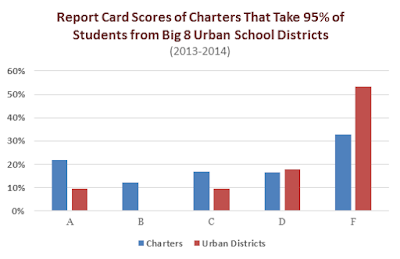 This is really interesting because it suggests that these high-performing charters have figured something out, namely how to increase performance of our state's urban youth. And that could be a very important and key finding.

See why I haven't given up on charters yet? There's potential here.

So while it appears a few charters have figured out how to improve the achievement of Ohio's urban kids, so have many of Ohio's urban buildings -- a fact we don't acknowledge enough in my opinion. 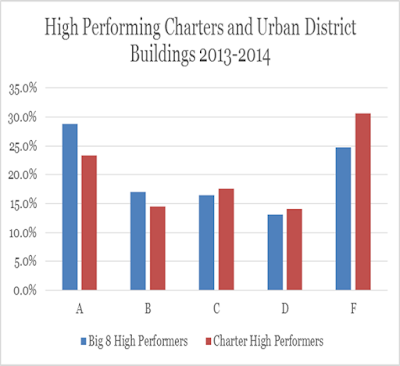 The performance differences aren't enormous, but they're there. And this points out perhaps the most important thing to be gleaned from the few charter school successes in this state: A great school is not exclusive to charters or public schools. It is not either type of school that will determine success; it's who is in the school that matters, both in terms of staffing and students. Students who want to learn, are supported at school and home and have dedicated, smart and creative educators leading them will do well. And it doesn't really matter if this is happening in a charter or public school. All I care is that it happens. And right now, it's happening far more frequently in Ohio's public schools than its charters. That doesn't tell me to kill charters. It tells me we need to re-focus and invest in the charters that do well while pulling back from those that don't.

I'll leave you with one final chart that shows Ohio's huge problem in one pie chart that demonstrates how much of the charter school pie Ohio's highest performing charters receive. 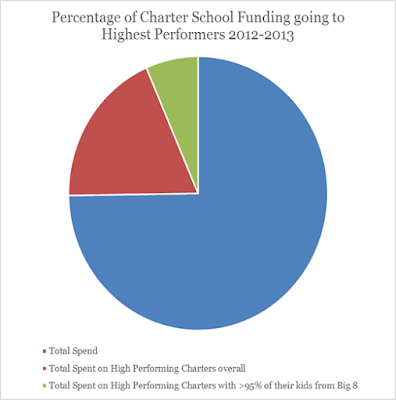 What's this mean? It means we could double the investment in high-performing charters and still have about a half billion dollars to invest in universal pre-school, all-day kindergarten, wrap around services in our neediest communities, or any one of a number of tried-and-true solutions to education challenges.

We are wasting hundreds of millions of dollars on charter schools that aren't doing anyone much good.

Our kids deserve much better. The question then becomes,"How can we make these work?" It is, in many ways, the $1 billion question in Ohio education policy. My fifth and final installment will seek solutions to the issues facing Ohio's charter school sector.

Tomorrow: Okay. Now what?
Posted by Stephen Dyer at 1:35 PM