Now that I've shown how state data indicate that Ohio's charter schools simply aren't up to snuff with Ohio's school districts, costing children in those districts millions of dollars a year, and that the excuses posited by some in the charter school community just don't hold water, I'm going to spend some time today looking at building-level data.

This is the data charter school proponents have argued for years should be the only comparable data when look at charter and public school performance.

Even though the state does not track which kids go from which public school buildings to which charters.

And charters are considered districts in state law for funding and accountability purposes.

But for argument's sake, let's look at charter and public school building performance. What you'll see is even in the light most favorable to charters, public schools outperform charters overall. Period.

Ohio’s charter schools perform worse overall than all local public school buildings, including those in the Big 8 urban districts (Akron, Canton, Cincinnati, Cleveland, Columbus, Dayton, Toledo and Youngstown) – the areas where charters were supposed to offer better alternatives. Charters register lower percentages of As and Bs while having higher percentages of Ds and Fs than local public schools. 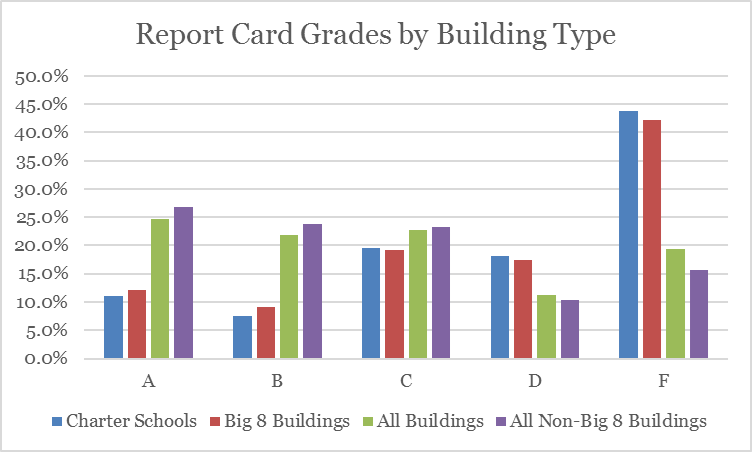 Remember that 45% of charter school students do not come from Ohio's urban core -- one of the myths dealt with in yesterday's post.

It is exceedingly unfair cherry picking for charter schools to take money and children from every district in the state, yet only have their performance compared with the most historically struggling schools in the state.

Even when one looks at individual performance breakdowns by report card category, the tale isn't a whole lot better for charters. 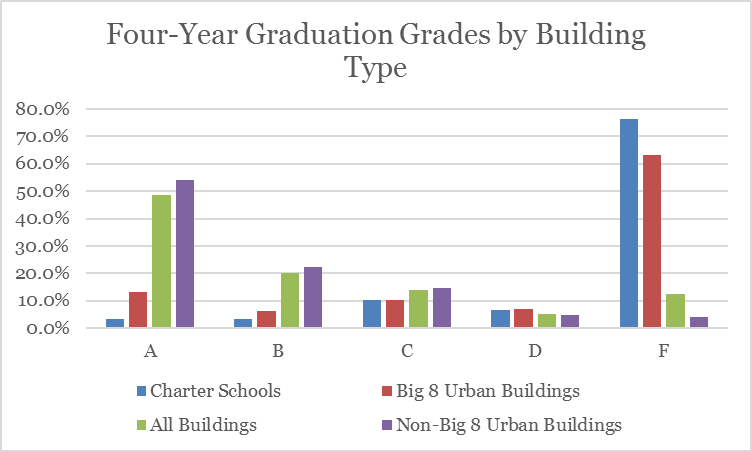 As you can see, charters are particularly poor at graduating students in four years (five-year rates aren't much better).

It's not as if the urban districts are performing swimmingly either. It's just that even with the urban schools' struggles, they pale in comparison with the struggles charter schools have had graduating children in four years. 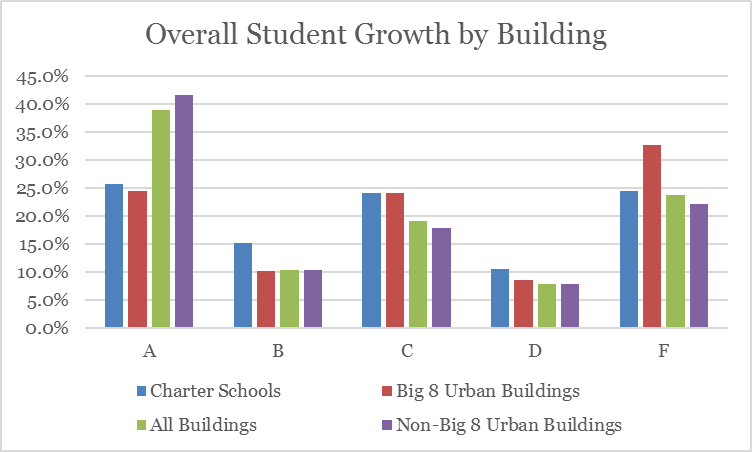 Student growth is clearly the best category for charters, but even that category isn't that great. Yes, the charters do better than urban districts. But once again, don't forget that 45% of children in charters do not come from there. And when compared with non-urban buildings, charters are woefully underperforming, even in this, their best category. 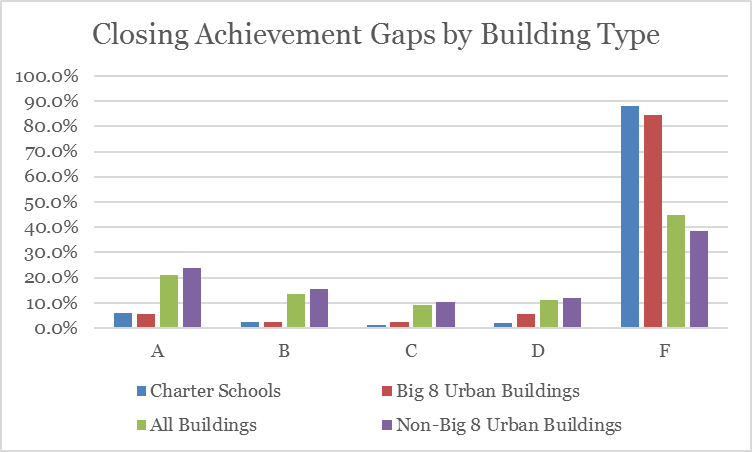 Probably the next most important report card category is closing achievement gaps. Charters get higher percentages of Fs than even urban schools, while receiving lower percentages of As, Bs and Cs combined.

As I discussed yesterday, demographics do not explain charter struggles either. And the building-level data demonstrate it, just like district-level data do.

One thing that's remarkable about Ohio's urban buildings is just how many of them have an exceedingly high percentage of poverty.

More than 1/2 of all urban buildings in Ohio have 95% or more of their children living in poverty. Meanwhile, 40% of charters do.

Yet despite the much higher concentrations of poverty -- a factor that research indicates should lead to significantly worse performance -- Ohio's urban buildings actually outperform charters on the state's Performance Index score, which measures a school's overall proficiency test results, by 6%. 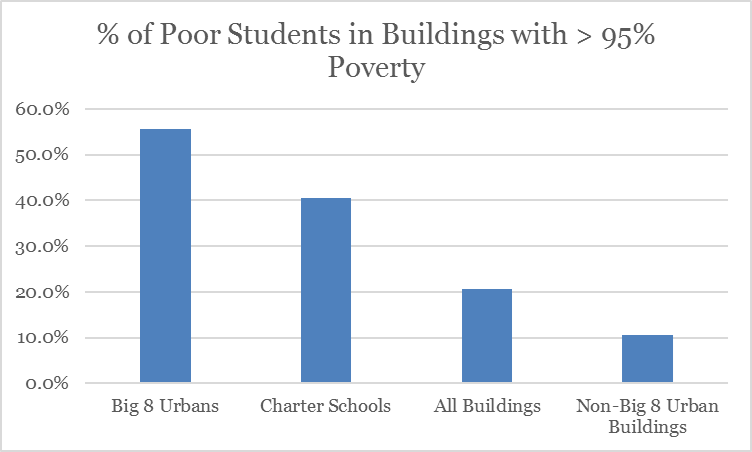 The results are all the more remarkable when you see that an even higher percentage of students are in these high-poverty concentration buildings in Ohio's urban districts. About 55% are. Yet the proficiency results show that students perform better in environments that research indicates should be producing worse results than charters.

Yet in Ohio's urban districts, that exacerbation still results in better performance on state tests than charters, whose buildings don't have nearly the high-poverty concentration.

So what does all this mean? It means much the same as the district-level data -- Ohio's charter schools are not performing as promised overall. And even looking at their performance in the most favorable light possible shows serious shortcomings in the overall performance of the sector.

Does that mean charters should go away? No. There are a few doing exceptional things. And that will be the focus of tomorrow's installment.

Tomorrow: Ohio charter schools don't work, except when they do.