For those of you who aren't aware, there are major changes happening at the University of Akron. From potential name changes to mission shifts, it appears the same university that produced the CEO of Goodyear (Charles Pilliod), perhaps the most influential rock band of the last 15 years (the Black Keys), the author of New York Times bestsellers (Michael Buckley) and comedian George Wallace needs to change the way it does business.

Amid all this discussion is a forgotten fact: Ohio (like many states) has dramatically divested itself from higher education over the last 20 years, just as its leaders have given lip service to the idea that we need to boost our academic attainment. For example, when I first went off to college in the 1990-1991 school year, Ohio spent $1.2 billion providing state support of instruction for the state's higher education institutions. Adjusted for inflation, that would be the equivalent of $2.2 billion this year. Instead, the amount was $1.8 billion. During the 2000s, the University of Akron saw its per pupil subsidy drop by nearly 25%. So could the drop in state aid be contributing to our state's universities' financial woes?

Anyway, while I'm not opposed to changing things, I deeply question how new University of Akron President Scott Scarborough could put so much faith in Todd Rickel -- the  vice provost and executive dean of the College of Applied Science and Technology.

It is Rickel, who calls himself an "Education Futurist" on his LinkedIn page, that causes me the greatest deal of pause. Why? Because, according to his resume posted at the UA website (and his LinkedIn page), he was the "Chief Learning Officer" for White Hat Management at the apex of that company's dominance of Ohio's charter school sector in the mid-2000s. He also served as the company's Executive Vice President of Life Skills High Schools and its Vice President of the company's Distance Education Group -- overseeing Ohio's worst online school (it had the lowest Performance Index Score of any online school last year), the Ohio Distance and Electronic Learning Academy (OHDELA).

During his time at White Hat, the company was receiving $110 million a year, on average, from Ohio taxpayers. Meanwhile, the schools' performance -- for which Rickel was directly responsible -- was dreadful.

When Rickel was at White Hat, the state did not have an A-F report card system. It had a very similar scale though: Excellent, Effective, Continuous Improvement, Academic Watch and Academic Emergency. Excellent was like an A, Emergency like an F. 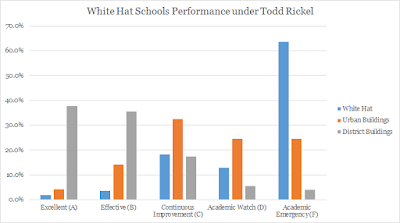 As you can see, White Hat had a far higher percentage of Academic Emergency ratings than even Ohio's urban school districts. They had exactly 1 Excellent rating and 2 Effective ratings.

Looking at different metrics doesn't help Rickel's case much either. 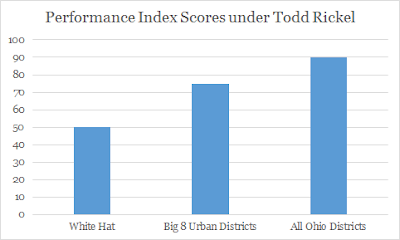 Look at his schools' Performance Index Scores. The PI measures proficiency test success. And as you can see, the average PI score of 50 in White Hat schools is 1/3 lower than urban districts and about 1/2 as good as districts overall. 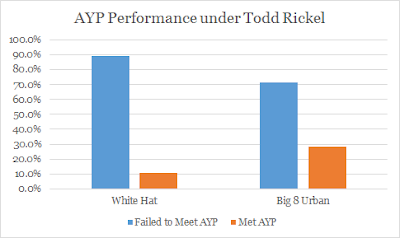 White Hat was failing to meet AYP at a 90% clip during Rickel's tenure. That is frankly horrendous. Not saying the 70% rate in Ohio's urban districts is great, but it is nearly 25% smaller.

Why do I bring this up? Because it is Rickel who is now telling folks at the University of Akron how to deliver their education experience. That's right. The people who educated some of the best minds in the region and country are being told what to do by a guy who ran several of the worst performing K-12 schools in the state.

And UA is paying Rickel $295,000 a year to do it -- the highest salary of three new administrators brought in by Scarborough in February.

Why would a respectable university turn over these major decisions to a guy with this background of educational failure?

Simple. Look at who runs White Hat. David Brennan. Brennan has an endowed chair at the University of Akron School of Law (where I graduated in 2005) and has been the state's most prolific campaign contributor over the last three decades to state lawmakers (all but 1 of his donations have gone to Ohio Republicans).

There is little question that in the Akron area -- where Brennan is from -- he remains a powerful influence, though his power statewide seems to be waning as William Lager, who runs the Electronic Classroom of Tomorrow, picks up the mantle of Ohio charter school political king maker.

All I'm saying is if you're going to turn over the reins of change to someone, would it be someone with Rickel's history?

But at least I think I've figured out why he calls himself an "education futurist". Given his past failings, I suppose his interest in future gazing is understandable.
Posted by Stephen Dyer at 5:35 PM