First New Report Card Grades Out. What a Mess.

The Ohio State Report Card grades for the 2014-2015 school year are finally out after about a 5 month delay. And only partially out at that (only K-3 Literacy, Prepared for Success and Graduation Rates were released). While there is plenty of data to comb through, my big take away from this is simple: it's a mess, primarily due to the hoopla over the PARCC tests and their opt outs. There are 78 districts that are protesting at least some of the grades released yesterday, with many appealing several.

Probably the most interesting grades released yesterday were the K-3 Literacy grade. Only 65% of Ohio's school districts receive a grade. And those grades weren't that hot with about 85% of districts receiving grades getting a C, D, or F. However, at the end of the day, only 668 3rd graders weren't deemed proficient in reading, according to the state data. That's .5% of the 122,000 students in third-grade last school year in Ohio's school districts. That seems pretty good to me.

Obviously, I'd like to see that number get closer to zero. But having 99.5% of third-graders be proficient seems like as close to a third-grade guarantee as you can get without getting to 100%, which is the percentage that should be all of our goals.

So if 99.5% of students meet the K-3 literacy requirement (proficiency in reading), why are the grades so low? It's primarily due, I think, to how many kids are caught up to proficient in each school year. For example, less than 1 in 4 second-graders that are behind in reading are caught up by the end of the grade, according to the state data.

But what seems most important to me is whether, at the end of the day, a third-grader is reading at the level he or she should by the time he or she finishes the grade. And in 99.5% of the cases, they are.

Charter schools are struggling more than districts, which is pretty much par for the course in Ohio. 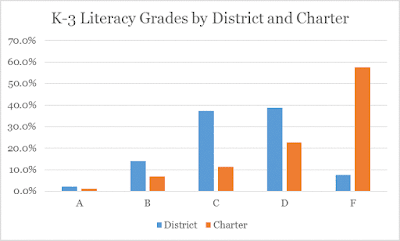 Though even in charter schools, only 5.4% of students are not proficient in reading by third grade. What is remarkable, though, is the concentration. For example, in Ohio's 613 school districts, 33 districts accounted for the 668 non-proficient third graders. Meanwhile, in Ohio's nearly 300 charter schools that were eligible to receive the K-3 Literacy grade (about 100 are exempt dropout recovery schools), 22 accounted for all 508 students who weren't proficient.

First of all, it's amazing that despite having only 9,300 third-graders, charters still had nearly as many students deemed non-proficient as Ohio's districts, which educate 122,000 third graders. But overall, more than 94% of Ohio charter school students were deemed to be proficient in third-grade reading last year. That's not bad. Not as good as districts, but not disastrous either. So that's decent news.

Again, I am comparing districts to charters because every district lost funding to the charter school deduction last year and about 1/2 of all charter students come from outside Ohio's urban centers. In addition, charters are funded by moving money from districts to the charters, not from individual buildings to charters, which means every kid -- even the highest performing in the highest performing building -- loses state revenue to charter school deductions.

There will be time to cull through much of the data released yesterday. But suffice it to say that this may be the most exciting time for Report Card controversy in years, thanks to the PARCC exams, which no longer are around, and the fact that many children were opted out of the exams, which probably has affected schools and districts' scores.

Judging from the appeals and protests, it is very likely that these data will change. Messy indeed.