There's a reason so many school districts are appealing the state report card data that just came out for the 2014-2015 school year. One of the major culprits has been the so-called "Prepared for Success" dataset that measures students' participation in college preparation, as well as their performance on the ACT and SAT, how many students remain in college two years after graduation, and a couple other things.

But here's where I start scratching my head. In Aurora, the state data say that about 1/2 of all kids need remediation based on their ACT scores.

Aurora is easily one of the finest districts in the state. Its middle school is a blue ribbon school. Its proficiency and growth scores routinely top the scales.

Yet half of those kids need remediation upon graduation? Really?

Does this even seem possible to you? 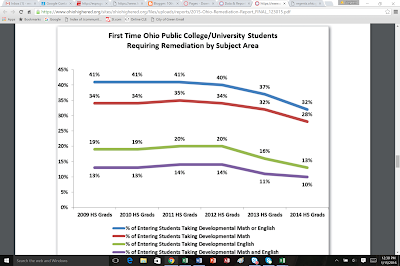 I know a little about this. I teach freshman composition at the University of Akron -- a large, urban university. I've heard for years in education policy land that "kids today can't write" and they need all kinds of remediation.

I'm here today to tell you that I simply haven't seen this rampant problem. I just haven't. Are there kids who struggle to write. Yes. Are there tons of kids who struggle? Not that I've seen. At least, not yet. Yes, my sample size is small. But I have freshmen in an open enrollment, urban university. And I have yet to come across anyone whose writing was so bad it's helpless. Some need more help than others, but to be held back a year for remediation? That's simply not needed, in my experience.

I've long been cynical about this sudden need for remediation in colleges. And for good reason. First of all, kids are more prepared for college today than at any point in American history. There are more dual enrollment options, Early College High Schools, AP and International Baccalaureate courses, not to mention a cultural push for college than when I went to school.

Yet this is the generation that's in desperate need of remediation? Something's not right. Either all these programs and efforts are failing. Miserably. Or there's something else going on.

And, in fact, that's what the research indicates. Several studies have shown that basing remediation needs on test scores is flawed, with as many as 1/3 of students being unnecessarily placed in remedial courses.

It is certainly coincidental that the rise in calls for remediation coincided with the deep cuts made to higher education from state legislatures, beginning in the late 1990s (in fact, the first instance of "college remediation" popping up in the literature on Academic Search Complete is 1998).

This cut in funding coincided with the steady rise in remedial courses being taken by students, which courses' bonus revenue helped offset the state funding cuts at universities, along with increased fees, etc.

And that if these scores are off, couldn't they also be off in places like Lorain, which according to the new report cards, had 20 of their 140 or so students who took the ACT test remediation free? How about the bad rates in Cleveland, Dayton, Columbus, Western Local, etc.?

Sometimes I wish the wonks (like me, I suppose) who put together datasets would step back and think about the results and whether they actually mean anything. If remediation rates are dropping, according to the Board of Regents, how can it be that in the average Ohio school district, only 1 in four ACT test takers and not even 4 out of 100 SAT test takers test remediation free?

Perhaps, as the studies I mentioned earlier show, basing remediation rates on test scores should be re-thought.

And, perhaps, you start to understand why so many districts are appealing these report card results.
Posted by Stephen Dyer at 1:06 PM