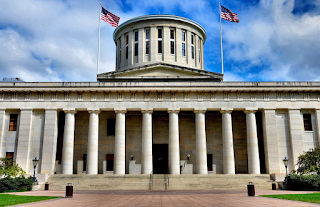 This is why I think people are driven nuts by government.

A couple days ago, Gov. Mike DeWine announced a $300 million cut would be coming in this school year for Ohio's K-12 school districts due to the COVID crisis. Very understandable. Absent the feds granting states flexibility on CARES Act stimulus money and doing another COVID rescue package for education, states and local governments, big cuts like what DeWine announced are expected.

We'll leave the debate over the state's $2.3 billion rainy day fund for another day.

But when DeWine's Office of Budget and Management (OBM) listed the district-by-district cuts ("runs" is what we call it in the biz), the percentage cuts didn't look all that bad. Between 1% and 2.8%. Given that $300 million is about 4% of the state aid handed out this last school year, that didn't jibe to me.

That's when I noticed that OBM was comparing the amount of money cut to all money being spent in a school district. That's all money spent. State, local and federal. So, yeah, it looks like the cut isn't that bad when you look at it that way.

But it's completely misleading. Why? Because the state has zero say in how much federal and local money is spent or raised in a district. So the state is taking credit for money it didn't send to or raise in the district.

I can honestly say I've never seen a district-by-district run expressed this way. Every other run I've seen has compared how much state money districts were receiving and how much they will be receiving now.

In fact, it's how DeWine put out his district-by-district runs last year during the budget. He compared his state funding increase (from wraparound services money) with the state funding schools received the prior year. That makes the percentage increase look bigger. If he compared it with a district's overall spend, the increase would have seemed smaller.

It's a budgetary parlor trick.

On the Surface, these Cuts Look Fair

So what's the real state cut, in terms that have always been used?

The average Ohio school district will get cut 5.9%, with some getting cut 55%. Half of districts will get cut more than 3.8%. Half get cut less.

But there is a silver lining to this. The largest percentage cuts are disproporitionately in wealthier, suburban communities. The smallest percentage cuts are in poorer communities less able to withstand them. So that 55% cut? It's in Rocky River in Cuyahoga County, which doesn't get much state funding anyway because it's so wealthy. Other major percentage cuts are in Upper Arlington (53.6%), Independence (51.4%) and Inidian Hill (47.9%). All tolled, suburban and wealthy suburban districts will absorb 41 percent of all the costs, even though they only make up about 17.7% of the state's foundation funding. 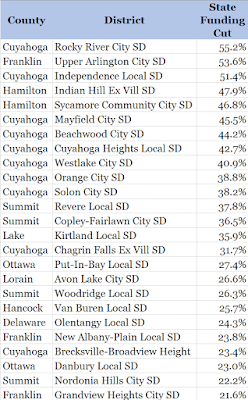 So while those cuts in Ohio's most vulnerable communities will be less, they will still be meaningful. There just isn't enough money being sent to the wealthiest schools to Robin Hood the cuts for very long.

But Ohio's Most Vulnerable Districts Still Get Disproportionately Hurt 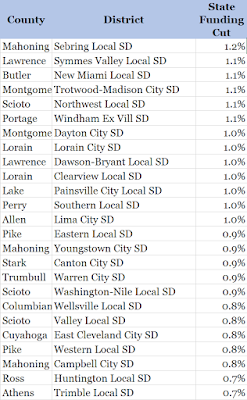 The way education funding works in Ohio is the state figures out how much it should cost to educate kids in your district, then determines how much of that cost you should be able to pick up based on your property tax values. The state then picks up the rest. And while there are serious problems with the way Ohio does this because the state formula for determining the cost isn't an actual formula, that's the calculus.

The issue though is everything hinges on the ability to raise local money through property tax levies. Districts that raise more ("wealthier"), have less state money coming to them. Those that raise less ("poorer"), have more state money coming. (And there are districts that aren't "wealthy" that are classified as such, like Coventry and Danbury, but that's another topic for another post).

The problem with this system is when state cuts come to districts, poorer districts' budgets are far more sensitive to state funding losses because they raise so much less locally. So a relatively modest cut in a poor, rural Ohio district could mean that district now has to go out for a larger levy (which won't likely pass) or cut services. Meanwhile, even a larger cut in a wealthier district won't have the same impact because they could raise even a tiny additional levy amount to cover it.

So even though 40.9% of all the money being cut is coming out of wealthier districts, the relative cut is worse in Ohio's poorer communities. 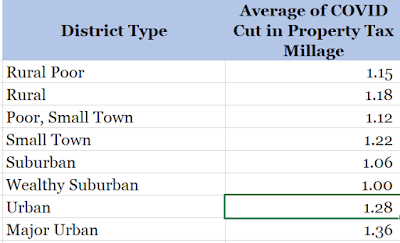 Rocky River's seemingly massive 55.2% cut? In actuality, they would have to raise a 0.88-mill levy to cover that loss. Meanwhile, even though Trimble Local in tiny Noble County only gets cut by 0.7%, -- the state's smallest percentage cut -- they would need a 1.55-mill levy to cover the cost. That's nearly double the levy needed to cover state costs from a community with a 40% lower median income than Rocky River.

Younsgtown would have to come up with nearly 2 mills of local levy money to cover their 0.8% cut. Lorain needs 1.55 mills to cover its 1% cut.

You get the idea.

So while DeWine did an admirable job trying to deflect a large chunk of these cuts onto the districts that could shoulder them best, because there simply isn't enough money being sent to the state's wealthier districts, the seemingly palty percentage of state funding cuts in Ohio's most vulnerable communities are still disproportionately burdensome to them.

It's simply a function of local ability to raise revenue to replace the state money.

This is why we need a real state formula and investment in education funding -- a task that seemed so possible pre-COVID and now seems like a pipe dream.

The other issue is timing.

These cuts, assuming they go through shortly, would be deducted from payments the state will be making to districts in May and June. There are 4 payments made in these two months, with one scheduled to be made tomorrow.

So over 3 payments, districts will have to absorb all the cuts.

While it's tough to do a district-by-district anylsis of this impact quickly, overall, the bi-monthly state payment to districts is about $336 million. So this cut will mean that instead of three bi-monthly payments at the end of this school year, districts will essentially only get two.

That could mean serious logistical problems for districts, which may have already made purchases or paid salaries that the payments were expected to cover. Now that they won't, what will happen?

This will be a quite concerning offshoot of these cuts.

And again these cuts are only for this school year. Next school year, expect more. And next biennial budget expect even more.

Unless the feds step in and free up CARES Act money and pass additional stimulus money. And the state taps its significant rainy day fund.

Until then, look out. Take cover. And pray.