Analysis: Ohio Schools Would Get Enough Stimulus to Cover About 30% of Expected Cuts. Maybe. 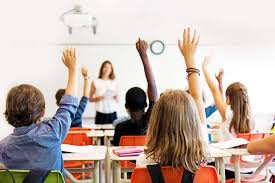 Tucked away in the $2.3 trillion CARES Act was about $14.3 billion for schools. And while that sounds like a lot, it's a relative pittance compared with the overall cost of educating America's 74 million school children.

But it wasn't nothing.

The Learning Policy Institute put out an analysis of how much each state would receive from that $14.5 billion. Ohio does OK. A little above the national average on a per pupil basis, but lower than all surrounding states except for Indiana.

More telling is this: That $547.9 million is just for one year. Ohio's budget is a two-year budget. And the stimulus money is only good through the end of this calendar year, which is only half of the current school year.

So while the $547.9 million infusion would equal about 7 percent of the total amount of money sent to Ohio's school districts through the state's funding formula next year (meaning it would theoretically cover a 7 percent statewide cut), the money would likely only go the districts through the end of the year, meaning that the state's next biennial budget would not have any of this stimulus money in it. 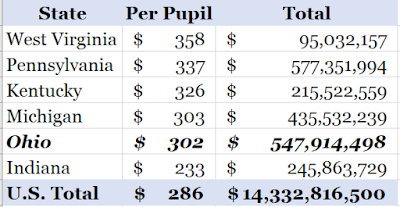 But let's assume states could pocket this money and put it into their budgets next year. This money represents about 25-30 percent of the cuts school districts are forecasting for next year, let alone over two years. So there needs to be a significant investment in education in the next COVID aid package. In fact, many school groups are asking for a $200 billion school package.

That amount should make up for the severe cuts being forecast in Ohio and elsewhere.

Some may talk about how great it is that the CARES Act provided money to schools. Believe me, I'd rather kids have this money than not, but keep in mind it's a small percentage of the expected cuts, and it may not even be allowed to be spent during the next biennial budget, which means it won't help cover any future school revenue losses.

Keep fighting.
Posted by Stephen Dyer at 10:44 AM