There's some good news (or bad news, depending on how you look at it) for charter schools in the new state report cards. Charters have slightly lower percentages of Ds and Fs on the state report card than the Big 8 urban districts (Akron, Canton, Cincinnati, Cleveland, Columbus, Dayton, Toledo and Youngstown).

And charters still have 73% Ds and Fs. The Big 8 has 79% Ds and Fs. However, Big 8 urban districts have a slightly higher rate of As and Bs with 14.5% to charters' 14%. Where charters really outperform urbans is on C grades. Urbans barely have any of those grades.

Here's the problem, though. Barely 1/2 of kids in Ohio charter schools come from those districts anymore.

When charters are compared with Ohio school districts overall, they woefully underperform the districts from which nearly 1/2 of their student population originates. And these data don't include the state's worst-performing charter schools -- the Dropout Recovery schools. Those schools have their own evaluation, which is woefully weak, as I pointed out last month. 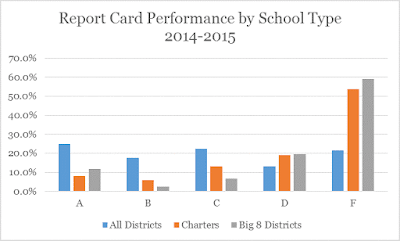 I caution anyone against reading too much into this year's data for a very simple reason: it probably won't mean much. Many more kids than usual opted out of the PARCC exams last year, upon which many of these grades are based. In addition, schools are receiving safe harbor from these grades because the state switched over from PARCC. Not only that, but many schools and districts are appealing these grades. So they very well could change.

But there are bits of good news here. For instance, when some states switched to the PARCC exams, their grades dropped precipitously. While Ohio's grades did drop, they didn't do so ridiculously by claiming, for example, that only 1/3 of Ohio's kids could read or something.

I will continue diving deeper into these data this afternoon. But overall, these data are telling the same story we've heard now for 16 years -- kids in Ohio's school districts overall are performing much better on state assessments than students in Ohio's charter schools, especially considering that 1/2 of Ohio charter school kids now come from outside the state's urban core.
Posted by Stephen Dyer at 1:49 PM