I will be posting more details throughout the day on the new state report card data the Ohio Department of Education just released. But the general trends aren't great, especially for charter schools, but also for districts. Then again, it's tough to judge this year's results because they were based on tests we don't administer any more and there are protests, appeals, opt outs and other complications that make dealing with this year's report card uniquely troublesome.

Here's the percentage of grade distribution for the grades released today: 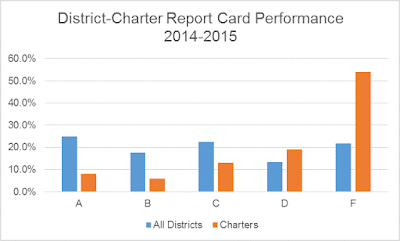