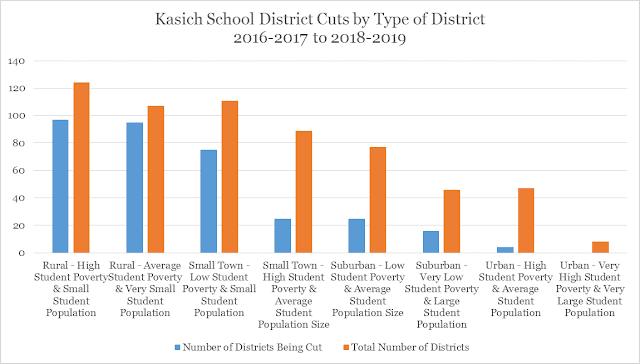 As you can see, Ohio's rural districts are paying for increases in Ohio's more urban and suburban locales. This is a function of Kasich's decision to wind down the "guarantee" -- a calculation done to offset funding losses due to declining enrollment.

Here's the problem: The loss in enrollment does not necessarily mean there's less service need. For example, if I have a district that has 100 students that cost $10,000 per pupil to educate and I lose 10% of those students, I'm still going to need the same number of teachers, custodians, buses, etc. But under Kasich, I will have $50,000 fewer state dollars with which to educate those students. That's the equivalent of a teacher.

I will be doing further analysis of these data in the coming days and weeks. But suffice it to say, Gov. John Kasich is taking state money from our poorest, rural school districts and using it to give small to moderate increases in our urban areas.

Oh, and all these cuts don't include the additional 1/3 loss in tangible personal property tax reimbursements Kasich's calling for in this budget. So chances are, far more than the 337 districts who get less money in two years will end up losing out. So stay tuned...
Posted by Stephen Dyer at 4:10 PM