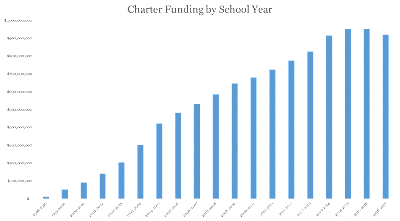 A newly minted study from the Center for Research on Educational Outcomes (CREDO) -- an outfit connected to Stanford University -- shows what we have known in Ohio for quite some time: Charter Schools in Cleveland are doing better than charter schools elsewhere in Ohio.

As part of CREDO's study on Charter Management Organizations (CMOs), which found that for-profit CMOs are doing worse than non-profit CMOs, CREDO found that the Breakthrough School network in Cleveland provided a benefit of 148 extra days in math and 120 in reading. While there are serious academic questions about CREDO's methodology for determining these "days" of learning (for a good back and forth, look here), the CREDO study confirms what has been known here for a long time -- Breakthrough Schools in Cleveland are Ohio's gold standard.

This is why I've contributed to the chain and attended several of their fundraisers. My son won their Superhero race one year, in fact.

The issue is they only run 10 out of the 373 charter schools listed in the Ohio Department of Education's charter school operator database. Yes, CREDO found that other Ohio operators are doing a good job, but, again, a small percentage of Ohio's charter school students are in those schools.

The study did re-affirm what I've been saying for years -- that David Brennan's White Hat Management is awful at running schools, though pretty good at making lots of money. Their Life Skills Academies -- a dropout recovery group that has trouble graduating even 8 out of 100 students -- are particularly awful.

Here's another issue, and it's one I've brought up before. Breakthrough doesn't take all of its kids from Cleveland. Yet their performance is almost always compared with Cleveland Municipal Schools'. Breakthrough takes just shy of 20 percent of their kids from outside Cleveland. And they require large amounts of paperwork to be filled out by parents, which kind of self-selects for involved parents -- the single greatest predictor for kids' academic success.

Many of the non-Cleveland kids come from Warrensville Heights and East Cleveland -- districts that struggle with state tests like Cleveland. But the fact remains that Breakthrough has a far smaller percentage of kids from Cleveland than Cleveland schools do, and they have kids whose parents are willing to fill out lots of paperwork.

Yet they're compared with Cleveland kids whose parents may never have stepped foot in a school since their own high school days. This has been a burr in my saddle for years, despite my tremendous respect and support for what Breakthrough's John Zitzner has done in Cleveland.

The other interesting thing from the CREDO study is they only looked at CMOs that run several schools. That means they didn't include Altair, which runs the nation's largest K-12 school -- the Electronic Classroom of Tomorrow and its 15,000 students. Though given the Ohio Department of Education's recent ruling, that number may be closer to 6,000.

But how poorly would CREDO have found online education to be (which it found to be the worst of all charter school types) if ECOT's putrid performance were included?

I know it's encouraging to hear that some charter schools in Ohio are doing a good job. That's never been something that hasn't been said, though. In fact, I've pretty much always said this. The issue is with a nearly $1 billion a year program, we should be getting a better statewide bang for the buck rather than just a couple handfuls of schools mostly in Cleveland.

Put another way, is it worth kids in Columbus and Cincinnati losing about a quarter of their state funding each year and Ohio's public school kids overall losing an average of about $250 a year in state money due to charter school funding so that a couple dozen successful schools can operate mostly in Cleveland?

Again, the role of state lawmakers is to look out for all Ohio kids, not just the small sliver that have found a successful experience in alternative education programs. We need state leadership who is willing to put as much blood, sweat and tears into figuring out how to improve the educational experiences of the 90 percent of Ohio schoolchildren who are in Ohio's public school districts as they currently do for 10 percent who do not.
Posted by Stephen Dyer at 12:17 PM