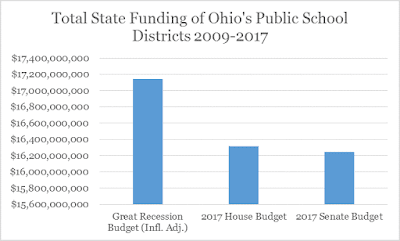 I'm growing weary of writing this stuff, but the Ohio Senate has once again misled Ohio taxpayers by claiming increases in school funding. The Senate's version of the budget bill actually cuts funding to Ohio's 613 school districts by about $70 million over the Ohio House's meager addition.

All the Senate has done is revert the funding levels to what Gov. John Kasich proposed, which represented about $900 million less in total, inflation adjusted dollars over this biennium compared with the budget that passed during the Great Recession.

Once again, I also have to take issue with Randy Gardner -- a Senator with whom I worked pretty well while I was in the House. He and his friends always tout how there is an historic level of state aid going into public schools.

What he fails to address is that while the state aid funding line has gone up, the overall aid has not kept pace.

You always have to watch how careful politicians in the General Assembly and Governor's mansion talk about school funding. It's always about one aid line, not all aid lines. It's like if you have two jobs and income from one has gone up 50%, but income from the other has dropped 75%. The overall result is a 25% cut.

All you need to know about how inadequate Ohio's school funding system is is to look at the monkeying they do to it. Playing around with how much school districts are guaranteed to get, or what funding cap needs to be instituted to keep increases down tells you there isn't enough money to pay for the formula.

Oh, and the formula itself? Simply a product of arbitrary increases done to a calculation last completed 10 years ago.

Another budget cycle is about to pass with the state failing to live up to its constitutional obligations to our kids. When will this end?
Posted by Stephen Dyer at 4:30 PM