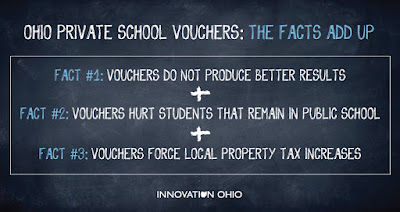 I don't like writing these things. I really don't. Because even when a policy I think is folly actually works, I'm glad that kids are able to benefit.

But the latest data, both from Ohio and nationally, demonstrate pretty clearly that private school vouchers simply aren't working. In fact, they are making things worse for kids both in private, mostly religious schools, and those who remain in local public school districts.

At Innovation Ohio, we released a report today that details many of the issues. Among them:

• More than $310 million will be spent this school year sending public money to private, mostly religious schools through vouchers

• Including additional direct state payments and reimbursements made to private, mostly religious schools, more than $568 million in Ohio taxpayer money is going to support these schools

• Every Ohio student not taking a voucher, on average, loses $63 a year in state funding because of the way Ohio’s lawmakers have decided to fund vouchers ($63 is about $15 more per pupil than we spend statewide on instructional and non-instructional equipment combined. It’s about the cost of a new Amazon Fire tablet.)

• In an era of the state providing less funding for public schools, its insatiable investment in private school vouchers force local taxpayers to subsidize them with $105 million in locally raised money to make up for districts’ state funding losses to Ohio’s voucher programs

• Some of the highest performing school districts in the state lose money and students to vouchers, turning the original intent of the program on its head

In Ohio, we call vouchers "scholarships". However these "scholarships" require no actual scholarship to acquire. There are no GPA or other academic requirements to receive a voucher. All that matters is if you meet the demographic characteristics. This is a voucher program.

The Ohio Senate and House are considering bills that would expand voucher eligibility to 75 percent of Ohio's school children, despite the overwhelming evidence these vouchers aren't helping. And, of course, current U.S. Secretary of Education Betsy DeVos is a huge voucher supporter, and President Trump's initial budget calls for a $1.4 billion voucher expansion, with plans to move that up to $20 billion shortly.

And here's something I'm very curious to understand: if the Cleveland voucher program was deemed constitutional 15 years ago because it was small, was meant to "rescue" kids from "failing schools" and financially provided far less state aid to private, mostly religious schools (as Chief Justice William Rhenquist opined during the case), then would it now pass the same muster given that it's a $310 million program, takes money from some of the highest performing schools in the state, and some vouchers provide almost the exact same level of base funding as the state's public school formula?