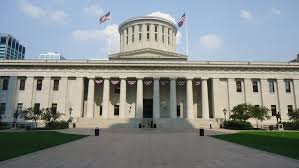 The Ohio General Assembly's Conference Committee, which is charged with reconciling differences between the Ohio House of Representatives' and Ohio Senate's budget bills have agreed on that bill. It is set to be voted on and passed this afternoon.

The education funding portion of the bill is, of course, disappointing. This budget will have $896 million fewer, adjusted for inflation, than the budget that passed during the Great Recession in 2009 -- the budget I helped shepherd as the Chairman of the Primary and Secondary Education Subcommittee on the House Finance and Appropriations Committee. In addition, 409 school districts will have less in the last year of this budget than they had in the last year of the Recession budget. 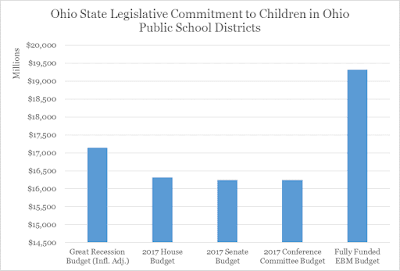 The disservice this lack of funding does to our kids is staggering. To add insult to injury, in 2009, we passed the Evidence Based Model of school funding -- a system that has been adopted by the country's most conservative state, Wyoming, and has utterly transformed that state from a bottom feeder on national rankings to one of the country's top rated states. 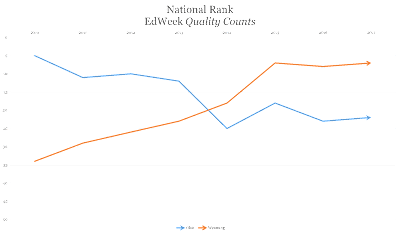 But because our revenues had bottomed out that year, we had to phase in the EBM over the next four budgets. This budget would have been the one that fully phased in the EBM. What would that have meant for kids in Ohio school districts? Another $3 billion in this biennium than what the state is about to pass.

That would have meant that a homeowner with a $100,000 home would have been able to realize as much as $420 a year in property tax savings.

Just so you wonder whether the money was there to do this investment, there is approximately $11 billion more General Revenue Fund revenue in the budget that is set to pass the Ohio General Assembly today than existed in the 2009 budget that created the EBM. 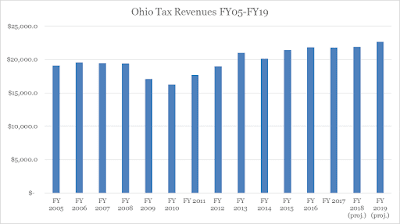 As I have always said about Ohio's struggle with education funding, it is not really a question of money.

It's a question of priority.

And for too long, our kids have been way, way, way down that list.
Posted by Stephen Dyer at 2:27 PM