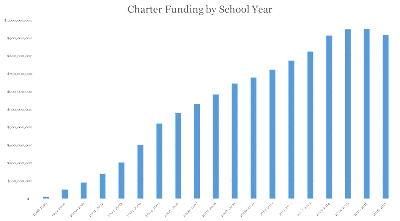 Ohio's Charter School Sponsor Evaluation System has come a long way since it was introduced in 2012 as a way to track how sponsors' schools rate.

Ohio has recently tried to beef up its sponsor oversight. Now there are real consequences. If a sponsor doesn't score well, it can be stripped of its schools. If it does well, it can sponsor more and be freed of some regulation.

However, there has always been an issue with these ratings -- an issue I've discussed since House Bill 2 (which put the teeth into the ratings system) passed in 2015. There are three components to the sponsor evaluation system upon which sponsors are judged. They are:

Under House Bill 2, all three components were supposed to be weighed equally -- a calculation I saw as problematic because if a sponsor failed academically, but received As on the other two more bureaucratic measures, then they would average out to a B-. So sponsors that have academically failing schools could keep sponsoring them, while sponsors that received As in academics but didn't score as well on the other two could be kept from sponsoring more schools.

The Ohio Department of Education tried to mitigate this issue through rule making, saying that if a sponsor failed any of the categories it couldn't open new schools (a process that seemed to me to be illegal because state law was pretty clear you couldn't weigh any one score more than the other, but I digress). However, that resulted in the highest academically rated sponsors (which were almost invariably public school districts or public education service centers) not being allowed to open new schools because they didn't do as well on the bureaucratic measures.

So you had the bad policy outcome of sponsors with the highest rated schools not being allowed to sponsor more simply because they failed to follow the bureaucratic measures.

In the current budget, which has been passed by the Ohio Senate and is now in Conference Committee, there has been a change to the system so that sponsors that fail in bureaucratic measures but excel in academics aren't automatically stopped from sponsoring more charters.

This is a positive step because now state policy won't stand in the way of sponsors with high performing schools from taking control of more schools because they don't fill out paperwork well.

However, there was another tweak that will weigh value added measures more heavily in the academic rating prong. What does that mean?

Value added measures sound good in theory (giving schools credit from improving kids' scores rather than simply looking at raw scores), but there are well founded issues with value added scores too that make their evaluative use questionable in some cases, especially as smaller populations of students are used.

In general, charter schools' value added grades on the state report card tend to be better than their proficiency scores. So will the change in academic scores show better performing schools among more sponsors? Probably. Will that mean that more sponsors will be able to keep sponsoring schools because their academic ratings will be artificially boosted by this tweak? We'll see.

As with most Ohio Charter School issues, the answer will likely be murky, complicated and need a fix in two years.
Posted by Stephen Dyer at 2:12 PM